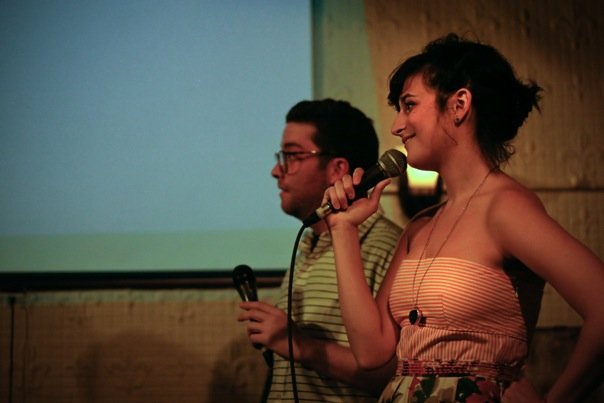 Pumping music, flashing lights and an auditorium filled with the indie laughter of hipsters—the Big Terrific Comedy Show in Portland on Sept. 16 stimulated our minds and our funny bones. The BTCS was part of the Time Based Art Festival and featured Gabe Liedman, Max Silvestri and Jenny Slate, three comedians from Brooklyn, New York.

The show consisted of three monologues by the three comedians and several group riff-seshes, a unique twist on the standard stand-up comedy format. Another intriguing twist on the show was the fact that it was held at Washington High School, an abandoned school built in the early 1900s.

The show itself was a lighthearted romp. The stories that were told provided insight into the lives of twenty-somethings living in New York. The stories were not just personal and intimate, as they remained light and hysterical.

Silvestri, the first solo portion of the show, discussed the downward spiral of purchasing bumper stickers. He also touched on the impatience of bartenders.

Liedman was up next where he conversed about online dating. He also had a great deal of potty humor, which can be hilarious for viewers of all ages, and in this case, it was.

The last act of the night, Slate, was the pinnacle of the show. She explained the difficulties of growing up as a female in a Jewish family. Slate had previously been on Saturday Night Live, contributing to the personality she used expressing her stories in the show.

High-quality comedy shows that are open to minors are few and far between. This show was an excellent example of a pleasurable and entertaining activity for teenagers on a Friday night.