Sing-Off shows off talent of acapella singers, even local stars 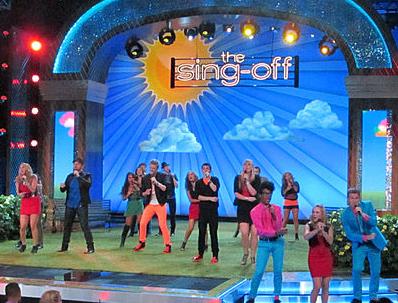 Singing shows have been on an uprising, such as the X-Factor, American Idol and The Sing-Off. But the reason the Sing-Off is different is that it is all acapella. And luckily, a local acapella group is receiving their chance to shine. The show includes the judges Ben Folds (Ben Folds Five), Sara Bareilles and Shawn Stockman (Boyz II Men) and is hosted by Nick Lachey (98 Degrees).

The show started out with all the groups coming out on stage, singing together, but then it was competition time. Dartmouth Aires were up first. From the Ivy league college, Dartmouth, shared a story about their friendship and their wishes to acknowledge past acapella groups at their college. The frontman said he was dedicating this competition to his mom because she recently past because of a stroke. They covered a Stevie Wonder song , which sounded very good, according to the judges. Bareilles and Stockman both agreed that the frontman’s mom would be very proud of him.

The next group was Pentatonics from Arlington, Texas. They take songs from the Top 40 and put an acapella spin to it. They found their beatboxer from a video on YouTube. Folds described the beatboxer as having “wicked effects” and Stockman said the bass was “refreshing.”

Sounding as if it’s from a movie or a book, but it’s a true story for Messiah’s Men, a band of brothers escaped from Liberia and came to Minneapolis, MN. They sing African songs, something they used to do in refugee camps to lift themselves from the oppression in Liberia. Folds described the unison as especially beautiful. Bareilles said, “Music is transcendent, and music is spiritual and triumphant and gives voice to something we don’t know how to articulate with words,” which explains this group really well.

A group from from Los Angeles, Sonos has been together for three years, trying to make a living. They normally use effect pedals (pedals, when pushed, distorts the voice in a certain way, depending on the pedal), but aren’t using the pedals for the competition, relying only on their voices. Bareilles said that she thought they did a wonderful job. Folds call the beatboxing “from the future.”

Unfortunately, one group did have to leave at this point which was Messiah’s Men. Eventually, it came down between Sonos and Messiah’s Men, the latter was voted off. After a commercial break, the second part of the competition began.

From Nashville, TN, The Collective is a mix of all types of voices. A singer from last year’s competition started the group, followed by his brother. He took his favorite artists from Nashville and put them into one group. Folds said he “didn’t feel lifted” when they got to the chorus, while Bareilles said that the groups blending was really solid.

Up next, the Wilsonville High School acapella group, Soul’d Out, preformed. They’ve been singing in the community and even received $1000 from local Fred Meyer stores for their trip. They performed “Song of the Aquarius” on the show. Stockman said that they held their own on the songs. Bareilles, after a shout out to small towns, said they showed a lot of maturity. Folds did some math, but then talked about the music and called them impressive.

North Shore, from Boston, MA, wanted to prove that doo-wop isn’t dead. In the 70’s, two of the members were in a disco band, but started singing in the group later in their years. Bareilles just came out and said, “I love you all” and later said that she loves when she can’t tell who is singing what part. Stockman said that they “held it down” and called it a great performance.

From the University of Delaware, the Deltones have a saying: “Friends first, singers second.” The original five members of the group were rejected from the other acapella groups, so they formed their own. Folds called the slow build really powerful, but he was distracted with all the members moving around. Stockman said that it felt good and said they had a lot of potential with a lot more to show.

But another group had to leave. It came down to Soul’d Out and the Deltones, but Soul’d Out just didn’t make it. They sang their last song, “Mama I’m Coming Home” by Ozzy Osbourne, and exited the stage.
This show was a lot of fun. To be honest, I was getting tired of the all the singing shows and I was excited for this show because it was different from the rest. You don’t hear a lot from acapella group, so it was exciting to see that they’re still around. But it’s really unfortunate that our local group were one of the first ones to go. Overall, it’s a great show to check out if you’re tired of the same old stuff that other singing shows keep producing.