“Contagion”: A stark vision of a planet in panic 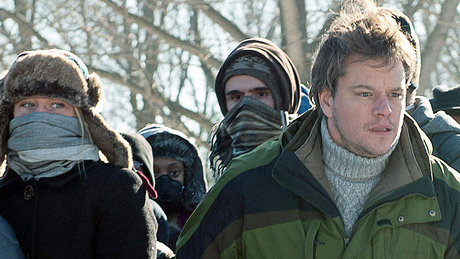 “Contagion” is the perfect analogy for the approaching overcast of the fall. As opposed to the over-the-top, action packed and generally uplifting summer blockbusters that have invaded movie theaters for the last three months, “Contagion” is a bleak portrait of an untreatable virus spreading at light speed through our evermore connected world.

The most enticing quality of the film is the star-studded cast. The story changes perspectives frequently, apparently to give the leading players some room to flex. Matt Damon plays Mitch Emhoff, whose life goes off the rails in an instant when his wife, played by Gwyneth Paltrow, becomes stricken with a mysterious illness and suddenly dies. Her death is followed shortly by the death of his stepson, who was infected by his mother. Laurence Fishburne, Kate Winslet, and Marion Cotillard all play scientists trying to respond to the disaster, even comedian Demetri Martin appears in a cameo as a CDC researcher.

The virus spreads and the scientists quickly realize how serious the problem is and conflict over how to respond. As hospitals are stretched to the breaking point, and the government dispatches the military to distribute supply and aid, the citizenry begins to panic. Meanwhile we also see Emhoff struggle to protect his daughter in the climate where, even in his small Midwestern town, looting and violence is rampant.
All of this star power is well used but none more so than Jude Law, who plays Alan Krumwiede, easily the most fascinating character in the film. Krumwiede is a freelance journalist and blogger turned prophet who advocates a cure for the virus he claims already exists, as it turns out Krumwiede’s motives are less than noble.

This movie has much more in common with director Steven Soderbergh’s epic historical saga “Che,” which follows the career of revolutionary Che Guevara, than it does with the light and entertaining “Ocean’s” trilogy. The film is bleak and clear, as though lit by fluorescent light, which contributes to the feel that it is more a distressing mystery, than a thrilling horror film. “Contagion” is a steady paced feel bad movie that is the best entertainment you can get this fall with a PG-13 rating, but will not knock you out of your seat. For its entertaining mixture of drama and Science-Fiction sensibility I give it four out of five stars.