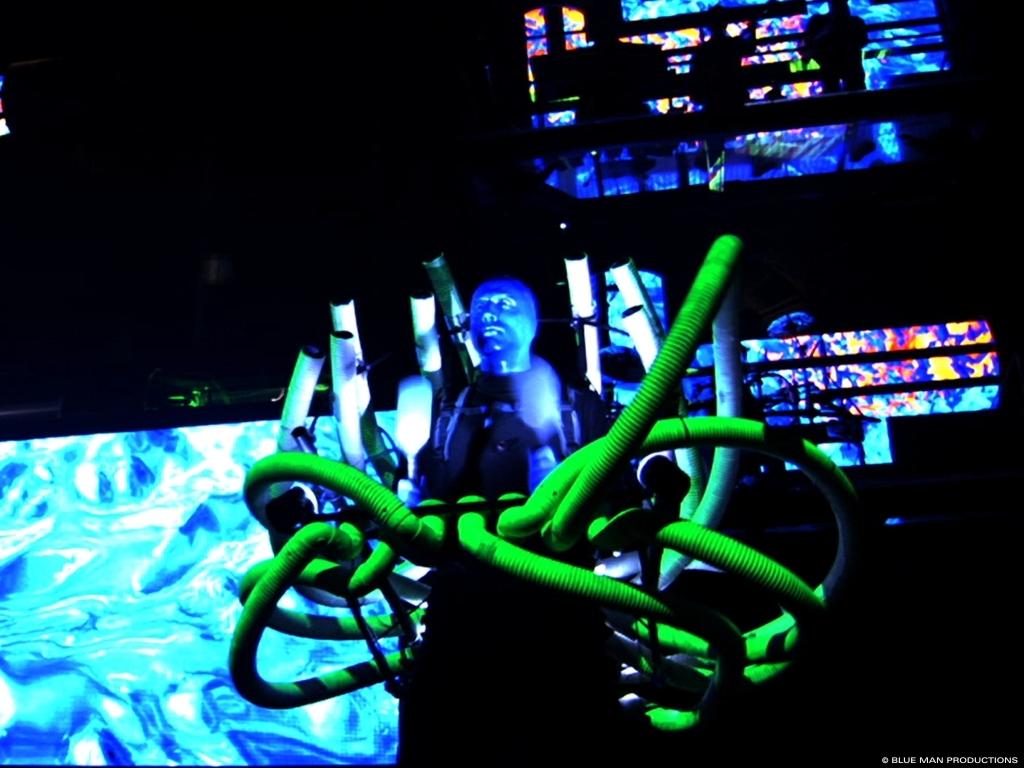 It was a concert with no singing. A comedy act with no punch lines. A theater performance with no formal plot line. Ultimately, it was indefinable. The Blue Man Group is truly one of a kind. The group performed Oct. 25 at the Keller Auditorium, and was nothing less than amazing.

When my parents bought tickets for the concert, I was unsure what to expect. Walking in, I still had a sense of wonderment about what was going to transpire. The program did not offer much explanation. Now, I am still unsure how to define what I saw. I am sure of one thing though; I loved it.

The Blue Man Group attacks both the eyes and ears with its performance. Loud music blared throughout the auditorium. Every member of the group played the drums at some point. It was no average drum show, however. Huge drum sets were used, and at one point the men played on a huge connection of pipes. The Blue Man Group manages to create a new genre of music. The visual piece was stunning as well; at some points in the show the performers beat paint off their drums, colored lasers shot across the stage, and animated figures quite literally walked across the stage. This inclusion of both senses was well done, and helped elevate the show to a new level of entertainment.

Three men donned in all black with faces covered in blue paint were the main performers. Part actors, part drummers, and part dancers, the show was primarily based around these three, with background drummers occasionally coming in to provide musical accompaniment.

Memorable scene after memorable scene filled the performance. One involved the “GiPad” a gigantic piece of technology heavily influenced by Apple’s iPad. The actors used this act to poke fun at society’s reliance on various gadgets, a common theme that the show made fun of multiple times. It was an interesting statement made by the group, a comment on society from a performance that otherwise was designed just for entertainment.

The Blue Man Group was never afraid to involve the audience, going into the crowd multiple times to continue a scene or pull out a participant. They even pointed out the untimely: when two late crowd members arrived, a spotlight and camera was focused on them as a live stream of their journey to their seats was displayed on an onstage screen. This image was sandwiched between the words “Late Alert”. However, this audience participation, while well intentioned, was drawn out to a fault. The one boring part of an otherwise enthralling concert was a scene in which the three performers had dinner with a crowd member.

They absolutely saved the best for last, though. The grand finale was essentially a dance party involving the whole crowd. Music filled the auditorium as the screen instructed members of the audience to shake their behinds. Hundreds of synonyms for the body part were spoken and shown on the screen as the crowd danced along with the music. After a few minutes of dancing, giant balls of helium were sent into the audience. It was like throwing a volleyball into the crowd, but on a massive scale. As people jumped to bat the balls around the lower level of the auditorium, huge amounts of paper were shot off of the stage into the paper. All the while, bass bumped and the crowd, young and old alike, grooved to the music.

After a short encore, the performance ended. And with that, the best concert I have ever been to concluded. It was loud. It was bright. But more than anything, it was fun. The performance, which lasted about an hour and a half, was the perfect length. While wishing it would last longer, I knew that the group had done what it came to do; The Blue Man Group offered a brand new type of performance while still commenting subtly on some ills in society. I cannot say enough good things about the group. I would recommend that anyone with the chance see the Blue Man Group perform live. You won’t be disappointed.