“The Avengers” crush all competition in theaters 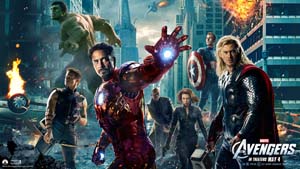 Going to a superhero movie can be intimidating if you’re not a hard core comic book geek or an action junkie, but not to fear, even the girliest girl can enjoy the new Marvel addition, “The Avengers”. There is an abundance of action and violence but not enough humor in most action movies. No need to worry, because “The Avengers” combines all the elements of a great comedy while staying true to its superhero roots. It combines physical comedy, witty one-liners and a healthy dose of violence to create a summer blockbuster that no one will forget.

You may know Captain America, the Hulk, Iron Man, Black Widow, Hawkeye and Thor, but “The Avengers” shows them in a whole new light. In the movie, these six heroes must combine forces to create the Avengers and defeat Loki, Thor’s evil adopted brother searching for vengeance (watch “Thor” for more information). This time, Loki’s goal is to take the tesseract from S.H.I.E.L.D, the secret military law-enforcement agency in Marvel comics. The tesseract, also known as The Cosmic Cube, is a magical cube of matter with unimaginable powers. Loki wants to take it and use it to open a portal into another planet in order to build an army and rule the world.

I thoroughly enjoyed “The Avengers” for many reasons. For one, it was flawlessly cast. You can tell that no one was chosen for their looks or because they’re popular; all of the actors fit their roles to a tee. Robert Downey Jr. was the perfect snarky Tony Stark, Scarlett Johnassen was a killer Black Widow, Chris Evans flawlessly portrayed Captain America, Mark Ruffalo was a smashing Hulk, Chris Hemsworth was a godly Thor and Jeremy Renner was a spot-on Hawkeye.

Although it’s a movie based on comic books, I was kept in suspense the entire time. I know that the good guys always win, but I didn’t know when or how that would happen.

Some moments were so laugh-out-loud hilarious that I had tears in my eyes from laughing so hard, while some scenes had me gripping the edge of my seat in suspense. Perhaps the best part of the movie was the seriously kick-butt action scenes when the Avengers showed their superhero skills. There are plenty of beat downs and petty brawls between the six heroes, as well as with the villains, which will leave every action fan a satisfied movie-goer.

One of my pet peeves with cinematography is that during fight scenes it’s hard to tell what’s happening. That being said, whoever was in charge of the camera for “The Avengers” deserves a raise because I was able to keep track of who was fighting whom the entire time and, most importantly, who was winning.

Another thing I found with “The Avengers” was that it didn’t have some random love story subplot between the heros and their civilian crushes. Sure, it had a scene of Tony Stark and Pepper Pots acting pretty lovey dovey, but there wasn’t a stereotypical “we’re not meant to be because I’m a superhero and you’ll get hurt” thing going on. They focused on developing the relationships between the heroes rather than relationships between their love interests.

My only criticism for the movie is that the details of the other world that Loki opened the portal to with the tesseract weren’t completely clear. I wasn’t sure what this other world was, what the creatures who came out of the portal were, or anything about the other world at all.

Other than that, I give the Avengers an A- for it’s knee-slapping comedy and well choreographed violence. I recommend it to every comic book nerd, action fan and comedy lover.

“The Avengers” is currently in theaters and is rated PG-13.