Starkid Apocalyptour takes musical theater to the next level 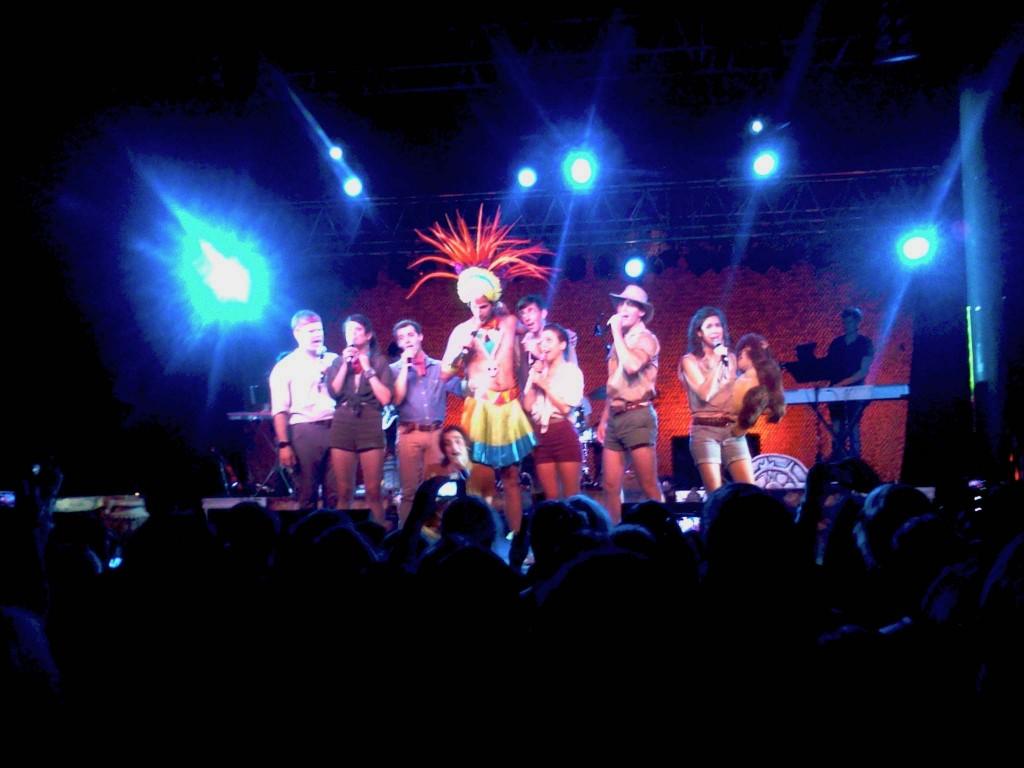 The most exciting thing in the world is to see your idols perform, whether they come from the starstruck city of Hollywood, Calif. or from the little town of Ann Arbor, Mich. This is where Team Starkid hails from, a group of University of Michigan graduates whose fame is credited to their release of musicals on their YouTube Channel, StarkidPotter. They released “A Very Potter Musical” on YouTube in 2009, which gained them massive Internet fame with almost nine million views. It has been amazing to see them grow into the people that they are now: Superstars.

Since “A Very Potter Musical” was released, their popularity boomed with a fanbase of almost 200,000 people. As a recent Billboard article adequately summarized: “They’re the new fame.” Starkid fans are incredibly diehard and are always jumping at the chance to support and defend their favorite musical theater group. The best thing about their tours is that it unites the fans even more, the concerts provide the rare opportunity of meeting others who appreciate the group just as much as you do. When I went to the concert everybody that I met was so friendly and nice, I had even befriended a few people before the end of the night. Even though Team Starkid is made up of many members, nine of them starred in the Apocalyptour: Joey Richter, Joe Walker, Dylan Saunders, Brian Holden, Brian Rosenthal, Jim Povolo, Meredith Stepien, Lauren Lopez and Jaime Lyn Beatty.

Being a diehard fanatic, I knew that I needed to get the VIP tickets; I could not miss the opportunity to meet my biggest idols. After preparing for an hour to make sure I could buy the tickets as fast as possible once they went online, I was given the greatest opportunity of a Crystal Skull VIP ticket to meet Team Starkid. All 25 Crystal Skull tickets had sold out within five minutes of them being put up. I was filled with elation and anxiousness once I bought the tickets, a mixture of “this is such a great opportunity” and “what makes me think I am capable of having a coherent conversation with them?” spun around in my mind.This VIP package included a free lanyard, small poster, program, a 30-minute meet-and-greet time period and a signing line.

As the 25 Crystal Skull ticketholders stepped into the dimly lit Roseland Theater to begin the meet-and-greet, all I felt was extreme euphoria and a little bit of hysterics. I was expecting a much more formal setting for the meet-and-greet: something along the lines of a firm handshake and one or two interview questions before moving on to the next person. It was nothing like this, however. I walked onto the concert floor and Dylan Saunders, one of the Starkid members, was welcoming us in and thanking us for coming with a big grin on his face. The rest of the Starkids were just scattered amongst the room, talking to each other and welcoming us in to their conversation. My feelings of nervousness zoomed down once I realized how laid-back and friendly the Team members were. My excitement stayed, though, and I seeked out any Starkid that I could have a one-on-one conversation with and took the opportunity.

What surprised me the most about the meet-and-greet was how down-to-earth the Starkids were. They didn’t treat you as anything less than equal, and they were all so appreciative of us being there and sharing this opportunity with them. Being the outgoing people that they are, they were quick to start a conversation and seemed genuinely interested in everything that we were saying. At times it was hard to fathom that these were my biggest role models and I was just having a normal conversation with them like they were my old friends; in a matter of hours everybody would be screaming their names.

After the half hour meet-and-greet period, all of the Crystal Skull members lined up to take group photos; a feature included in the VIP package. It was a quick moving line, but they made it feel fun and personal by letting each of us choose a theme for the photo. My theme was “Secret Agents.” Akin to their goofy and theatrical nature, they made the silliest poses they could manage no matter the theme. They never batted an eyelash at the themes people suggested for the photos, from “90’s Boy Band” to “Muscles” to “Group Hug.”

Since we had VIP tickets, we were able to choose our standing location for the concert first. We stood in the front row, right next to the speakers and up against the barricade. Not only was it great because we were so close to the Starkids while they were performing, but it was also nice to lean on the barricade and have some fresher air than the people who were in the middle of the floor, surrounding by screaming fans.

The concert was, by far, the best show I had ever gone to, through the high energy, the great songs, and the experience overall. The opening act was Charlene Kaye, who helped kick off the night with some high-energy songs and a lot of dancing. Many fans already knew of Charlene Kaye beforehand, as she is friends with many of the Starkids and one of her debut songs is a duet with Darren Criss. It was magical to see everybody in the room singing along with some of her more popular songs, like “Dress and Tie” and “Animal Love I”. It just goes to show how fanatical the Starkid fandom really is; not only are we avid supporters of Starkid themselves, but we enthusiastically support anybody who is associated with them.

After Charlene Kaye left the stage, there was a bit of a waiting period between her and the concert to begin. You could feel the waves of excitement exuding from the fans, just waiting for the first song to start.

Once the band entered and they began to play, they were met with waves of screams and cheers from the crowd. When the first Starkid, Joey Richter, entered the stage and began to sing, we all quieted down enough to listen to their singing, in complete admiration of their beautiful voices. They kept the high energy up through the entire show, with flashing lights and awesome dance moves. Most of the people in the audience knew all the words to the songs, and sung along enthusiastically. From the hilarious dialogue they inserted between songs to the awesome harmonies, it was a top-notch performance. I had only seen them perform online up to that day, and so seeing them perform live was just breathtaking. As they are a musical theater group, they performed various songs from their musicals, but made new arrangements. This was their second tour, so they played a few favorites from their last tour as well. You could tell how much they had improved even from their last tour, the concert was much more fluent and the songs flowed from one to another.

If I had the chance, I would do it all over again a million times. The meet-and-greet was a great way to connect with the performers, and the best part was knowing that you had just talked to them when you saw them singing on stage. Their down-to-earth nature and great sense of humor made me love them even more than I thought was possible. It was an experience I will remember for the rest of my life.