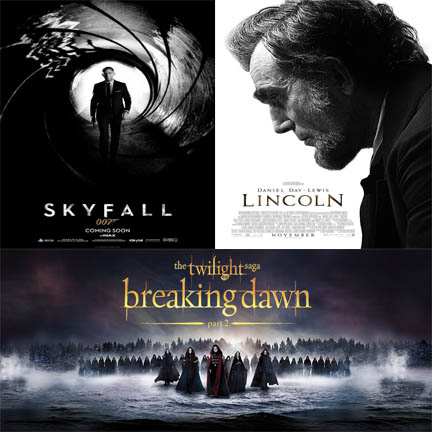 Every year around Thanksgiving, with all the shopping and prepping for the Holidays, it can become really hectic. With all the good movies that came out recently people were looking for a way to avoid the chaos and relax. “Twilight Saga:Breaking Dawn Part Two”, “Skyfall” and “Lincoln” were the top three earners, with “Life of Pi,” “Red Dawn,” and “Wreck it Ralph”not far behind.

“Twilight Saga:Breaking Dawn Part Two” made  $183,724,670 over the break. It is the fourth and final installment of the popular series. Bella Swan becomes a vampire and deals with the Volturi after having a half-vampire child.  Some students really enjoyed the film such as Lauren Cheever, freshman, who said “It was the best one by far.” Others thought it was the worst. “I found the dialogue to be even cheesier and stereotypical than in past movies,” Kayla Gadd, freshman, said.

“I was surprised I enjoyed it.” Tyler Shipley, junior, said. “It has come a long time from “Twilight.”

Skyfall made $65,804,041 over the Thanksgiving break. It is the 23 third installment in the Bond series, and Daniel Craig’s third performance as James Bond. “Skyfall” had mixed reviews from students as well.

“It was exciting, but not worth the money I paid to see it, Mia Palmer, freshman, said. “It could have had more intense action.”

Lincoln made $35,745,547 over Thanksgiving break. It is about convincing the Democrats to free the slaves during the Civil War.

There is big anticipation over the movies coming out around Winter Break like, “The Hobbit”, “Les Miserables”, and “Dijango Unchained”.

Dylan Martins, freshman, is really looking forward to the Hobbit. “I love the ‘Lord of the Rings’ trilogy and this is the first time I’ve ever pre ordered tickets for a midnight premiere,” he said.