Bruce Springsteen and the E. Street Band take over Portland 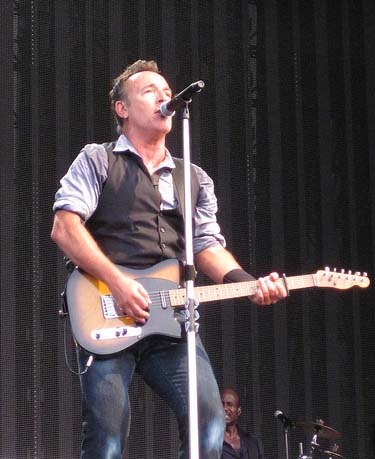 “Are there any strong women out there tonight?” Bruce Springsteen asked before taking a stage dive into the crowd. At age 63, crowd surfing has become a common occurrence during his shows, as he displayed last Wednesday, Nov. 28 at the Rose Garden. During “Hungry Heart,” Springsteen spent much of the song on a small stage located in the middle of the crowd, shaking hands with fans while singing, only to be sent back to the main stage by crowd surfing over hundreds of fans — also while singing.

As proven by the three-hour, 26 song set, age has not been an issue for the energetic Springsteen. Recently in Helsinki, Finland, the E Street Band played a four-hour show for the first time in the history of the E Street band. Seventeen members are currently touring with E Street, including a five piece horn line, a second percussion section, and multiple back up singers.

Keeping the arena lights on, E Street took the stage with “The Land of Hope and Dreams,” a song commonly used as a closing song. Opening with a closer alerted the already awed fans they must expect the unexpected.

As the lights faded to black, the band covered a verse of “People Get Ready” by the Impressions. Springsteen asked fans to prepare to board “The Train,” before playing into “No Surrender.”

Touring in support of the new album “Wrecking Ball”, Springsteen played new songs, “We Take Care of Our Own,” “Wrecking Ball” and “Death to My Hometown” consecutively. Springsteen managed to make the new songs sound as strong and timeless as the rest of his loaded catalogue, which spans a nearly 40-year period.

“Death to My Hometown” preceded a powerful, nearly 15-minute rendition of “My City of Ruins,” which Springsteen dedicated to victims of Superstorm Sandy, fallen band mates, and also as a moment of remembrance for any fan who may be missing a family member.

Clarence “Big Man” Clemons, saxophone player and member of E Street, passed away in June 2012. Springsteen hushed the crowd and offered a moment of silence for late band members Clemons and Danny Federici, organ player, before crescendoing back into the chorus of “My City of Ruins.” This moment was so heartfelt, it could have been a religious ceremony held at the First Church of E Street.

To keep the spirit of those who have passed alive, “Spirit in the Night” followed.  This saxophone-heavy song allowed the excellent Jake Clemons, Clarence’s nephew, to take the spotlight, following Springsteen around the stage as he shook hands with more fans while collecting signs with song requests.

The first fan request was a homemade roulette wheel which landed on the section “Employee Appreciation Night: Steve’s Choice.” Guitarist Steven Van Zandt happily picked “Loose Ends,” a song which was somehow cut from the album “The River.”

One lucky fan had a 50th birthday to end all birthdays. He  requested the band play “Growin’ Up” and as a birthday surprise, Springsteen pulled the man up on stage and let him sing the song and momentarily command E Street.

The surprise song of the night was a full band, rock version of the formerly acoustic “Johnny 99.” Topped off with alternating horn solos, this was not the standard issue version heard on “Nebraska.”

Closing the regular set was “Thunder Road,” the first track of “Born To Run.” After this song, the lights went out, providing the only break the band received all night. Springsteen began the encore with an acoustic version of “If I Should Fall Behind,” before blasting into “Born To Run.”

All of the lights once again came on as the energetic “Rosalita (Come Out Tonight)” began. It was impossible to remain in your seat during such an upbeat song. Even the band let themselves go and enjoyed the moment. Partway through the song, Springsteen and Van Zandt performed a Three Stooges routine before showing off some steps to “Gangnam Style.”

In honor of the holiday season, E. Street performed “Santa Claus Is Coming To Town,” while sporting Santa, elf and reindeer hats. With green and red stage lights shining down on the crowd, even those who do not celebrate Christmas could happily sing along.

The show closed with the classic “Tenth Avenue Freeze-Out” off of “Born To Run.” This used to be one of Clarence Clemons’s moments to shine, with the line “The change was made uptown, and the Big Man joined the band,” followed by a saxophone solo. After this line, the music stopped and a photo montage of Clemons was shown on screen to the delight of fans. Springsteen stood in the crowd on the stage where he had previously stage dived, and watched silently.

Clemons may have passed, but the “Big Man’s” legacy will live on E Street forever.

Following the video, Jake Clemons nailed the same saxophone solo, then fist pumped to the crowd before taking the microphone with Springsteen.

The closing moments of the show had every fan on their feet clapping and yelling with the band. Following the final note, the arena was filled with what may sound like boos to an inexperienced E street fan. They were not boos, rather a never ending chant of the word Bruce.

After three hours the band members slowly walked off stage, looking more like they had just played a basketball game rather than a concert. Springsteen and Jake Clemons spent one last moment embracing each other at center stage before finally walking off with their arms around each others shoulders.

Waching E Street perform live adds a deeper meaning to the lyric, “Bring on your wrecking ball.” While onstage, it appears nothing can stop them — not even death. This is a band that truly loves what it does and it is apparent every moment on stage.

Wednesday’s show was a night to expect the unexpected. As E Street played through rarities and classic songs alike, this was the type of show fans rarely experience. This concert earned an A grade for the elite performance and setlist. Not many artists have the ability to perform songs like “My City of Ruins” and “Santa Claus is Comin’ to Town” in the same concert and make it fit together like an intricate puzzle. Although they have been performing since 1973 and have released 17 studio albums, this is a band that shows no signs of slowing down anytime soon. This is good news for anyone who calls themselves a music fan.