Depression and confusion actually make for some fun in “Side Effects” 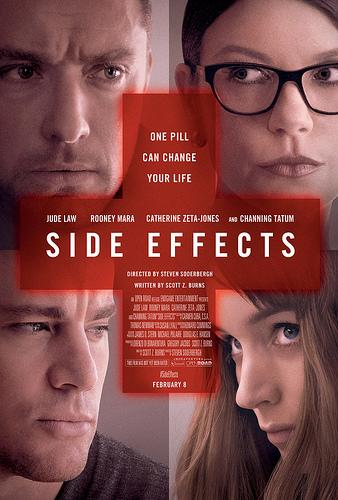 “Side Effects” is one of those films that you walk out of theater thinking about and you continue thinking about for the rest of the day. A masterpiece of the low-action, slow-burn suspense thriller, ”Side Effects,” is the perfect accompaniment to a moody, rainy spring day.
In the opening scenes of the film we meet Emily Taylor (Rooney Mara), a depressed 28-year-old living in New York City who has been living alone while her husband Martin (Channing Tatum) serves time for insider-trading. Even after Martin has been released, Emily continues to struggle with her depression and eventually attempts suicide. After her failed attempt, Emily begins psychological therapy with Dr. Jonathan Banks (Jude Law), who prescribes her drugs to treat her depression. After trying a variety drugs, none of which stop her depression, Dr. Banks prescribes Abrixa, which works perfectly, with the exception of one side effect: Emily walks in her sleep.
The results of her sleepwalking kicks off suspense and drama for the rest of the film. The focus of the film then switches from Emily to Dr. Banks. It is a brilliant maneuver that both causes the viewer to reexamine what he or she thinks they know, and to bring up new questions and suspicions.
The suspense that builds up to this point is mainly thanks to Steven Soderbergh’s direction. Unusual camera angles and darkly-lit scenes give the film a stark, dream-like feel that keeps the viewer from ever feeling at ease, adding to the tension and suspense. The film looks much like Soderbergh’s 2011 film, “Contagion,” also starring Law, with the addition of the suspenseful, twisting plot that “Contagion” lacks.
Along with a really interesting story and the masterful cinematography, the acting in “Side Effects” is fantastic. Mara’s placid countenance perfectly portrays depression while Tatum’s strutting charm captures the confidence of a Wall Street player and a loving husband.
Law also shines in this movie as a man whose life is going just the way he wants it to when it suddenly falls apart. He plays the frantic hero perfectly, transitioning from a restrained professional to a hard nosed truth-seeker seamlessly. Catherine Zeta-Jones plays Emily’s former psychiatrist and her pursed lips and tight features go excellently with her mysterious role in the story.
Overall, “Side Effects” is a great slow-paced thriller; it mixes Soderbergh’s unique cinematography and the plot twists of a Hitchcock film.

I give “Side Effects” an A for great acting, story and direction.

It is rated R for sexuality, nudity, violence, and language.