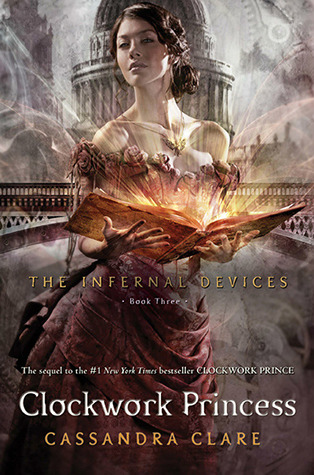 Young-adult fans of romantic fantasy books better hold on tight to their chairs and their hearts. With its release premiere on March 19, author Cassandra Clare’s final installment of “The Infernal Devices” series, “Clockwork Princess,” is an action-packed novel that is sure to pull on those heartstrings↽hard.

“The Infernal Devices,”  the preceding trilogy to the best-selling series “The Mortal Instruments,” takes place in the past. Clare takes us back to 19th century London, where the heart of the mystery of Shadowhunters and demons lies. Shadowhunters, also known as Nephilim, are a secretive race of humans who are born with the blood of angels. Through their dedication to fending off demons in order to protect humans (referred to as “mundanes”), Shadowhunters have created their own culture and world.

But in this era, the Shadowhunters have been called to face one of the race’s greatest threats, a man known as Mortmain the Magister. Like the prequels “Clockwork Angel” and “Clockwork Prince,” this book centers on the main character, Tessa Gray, a human who is particularly special to the Shadowhunters. She has spent time with her friends Will Herondale and Jem Carstairs in order to defeat Mortmain. Unfortunately, Tessa is actually the key to Mortmain’s final scheme: inventing humanoid robots and animating them with the souls of demons to lay waste to the entire Shadowhunter population. As if the plot couldn’t grow any thicker, readers are bombarded with even more romantic angst (there was plenty to go around in the first two books) as Tessa struggles to choose who her heart belongs to: either to Will, the one she first loved, or to Jem, the one to have first proposed.

(And ladies and gentlemen, if you thought it was impossible to love two people at the same time, please, I welcome you to step into Tessa’s shoes.)

As a 592-page novel, this plot leaves nothing to be desired.  No detail is unnecessary and every scene serves to build the plot. Clare has a clever way of intricately tying all the little bits of history and “loose ends” to fit nicely and to flow. If a reader asks a question about how one character relates to another, or how one thing was able to happen, Clare answered it. Clare managed to include many separate scenes that, at first, seemed to be jumbled and confusingly misleading, but later served a meaningful purpose. These series are heavy with detail and sometimes a bit excessively, but Clare uses this method to build personality, character and relevance to appeal to the audience.

In addition to crafting an in-depth plot, Clare’s writing ability is formal and her mastery of it is obvious in “Clockwork Princess.” This technique is present in all of her Shadowhunter books, but it is particularly incandescent in “The Infernal Devices,” as the elegant and romantic setting of Victorian London implies a bit more grace and poetry in atmosphere. Most of the dialogue exchanged between Tessa and Will and Tessa and Jem seemed more like song or poetry, which, I admit, swooned me more than I would’ve thought words could possibly do. Clare’s writing never bordered on cliche; her unique description and summation gave her writing its own genre.

One particular writing tool Clare has used throughout all her Shadowhunter books that influences a lot of the stories is the use of titled chapters, some of which are titled after lines in poetry or famous quotes by authors, poets and playwrights. In “The Infernal Devices,” Clare pulls quotes from works of literature that would pertain to the time and setting of the book, in this case, Victorian London. This all relates to Tessa,as she is written as a young female who enjoys reading very much; in fact, she shares some of her favorites with Will, including “A Tale of Two Cities” by Charles Dickens. Even though this trilogy was published after “The Mortal Instruments,” fans have praised and approved this tool even before “The Infernal Devices.”

With eight published books in these series, Clare has done it again. “Clockwork Princess” proves that there is more to fantasy than just defeating evil; one cannot simply walk away from the problems in life that can prove to be more fatal than any army. Clare strongly supports the friendships and bonds that her characters make, and through teamwork, trust and time (no pun intended), there is hope at last. And perhaps it is not because I fall within the target audience of these books, but because even as a fictional story, these characters and their perseverance through predicaments relate to any reader. Besides, the personal and relative impact of fictional characters is catastrophically underestimated.

I give “Clockwork Princess” an A+ for its poetic beauty, engaging plot and the emotional turmoil/satisfaction it has inflicted/given. I highly recommend this series, if not “The Mortal Instruments” first, to any young-adult and even adults who are thirsty for a taste of what a new world of fantasy has to offer.

“Clockwork Princess” is available at Barnes & Noble and Amazon for $19.99. It is also available on the Nook for $9.99 and on the Amazon Kindle for $4.99. Be sure to read “The Mortal Instruments,” which currently has five books, and be on the lookout for Clare’s next series, “The Dark Artifices,” set to release in 2015.