“Not That Kind of Girl” encompasses life for the modern woman 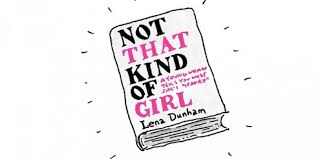 Ever since the HBO series “Girls” became a hit, Lena Dunham, creator and actor, has become an important figure for young women all over America. Her raw, honest comedy, as well as her fresh ideas on feminism, is what made Dunham’s 2014 memoir “Not That Kind of Girl” a must-read.

Being a fan of Dunham’s writing on “Girls,” I was excited to pick up her book. Not only did I want to see how she became popular in the realms of comedy and feminism, but I just wanted to know her life story. While she didn’t write much on her rise to fame, her recounts of her adolescence and young adulthood in New York City were brutally sincere as well as beautifully nostalgic.

Not only does she narrate events of her adolescence, but she talks about her controversial sex scenes in “Girls,” as well as her romantic relationships. She writes openly about everything–which is refreshing coming from such a young woman in the spotlight.

As she wrote with strength and little regret, she also wrote whimsically; her quirky humor is sprinkled throughout the text. One of my favorite chapter titles was “18 Unlikely Things I’ve Said Flirtatiously”

With all the details in her stories I expected to be bored, but I wasn’t, I even read several pages of notes about her diet in 2010 and was still engrossed. Her cleverness and clearness in her writing makes the least interesting chapters interesting.

“Not That Kind of Girl” may be the first modern memoir I’ve read, but I have never identified more with a memoir, dare I say any book in my life. She understands what it was like to be a girl over the past two decades through her stories of love, confusion and triumph.

I give “Not That Kind of Girl” an A for Dunham’s ease in tackling tough issues for women in the 2000s. She’s warped feminism and humor into something all of us can talk about.