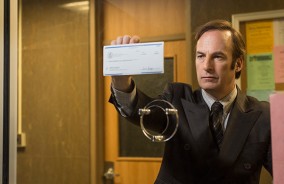 “Better Call Saul” features Jimmy McGill, played by Bob Odenkirk as he struggles to make a name for himself as a lawyer and eventually as a criminal. The prequel to “Breaking Bad” airs Mondays at 10 p.m.

One of the most anticipated series of 2015, “Better Call Saul,” the prequel to “Breaking Bad,” has exceeded expectations with its funny characters, absorbing plot and contrast to “Breaking Bad’s” filming style. The first two episodes aired on Feb. 8 and Feb. 9 but will air regularly Mondays at 10 p.m.

The AMC crime drama begins in black and white with the character Jimmy McGill, AKA Saul Goodman, depressed and working in a Nebraska Cinnabon. Presumably, he’s in hiding after he left the characters in the last season of “Breaking Bad.” It then cuts to 2002, in color, when he is a struggling lawyer driving an old Suzuki Esteem, working in the back of a nail salon and taking care of his sick brother. Despite his recent troubles, McGill speaks with the same enthusiasm, confidence and wit that fans of the franchise know and love him for.

“Breaking Bad’s” originality, superb characters and deep intertwining storytelling is what gave writers the possibility of creating a spin-off. Both Walter White, the main character in “Breaking Bad,” and McGill’s descent into crime takes these shows from a drama to a full-blown thrilling experience playing out on screen.

One of the elements that is different in “Better Call Saul,” is its comedy. Thanks to Bob Odenkirk who plays McGill, the show is lively and funny while still capturing the dark undertones creators Vince Gilligan and Peter Gould wrote. Even within the first two episodes, McGill’s showiness and lawyer skills pull him into trouble, but also help him to pull himself out.