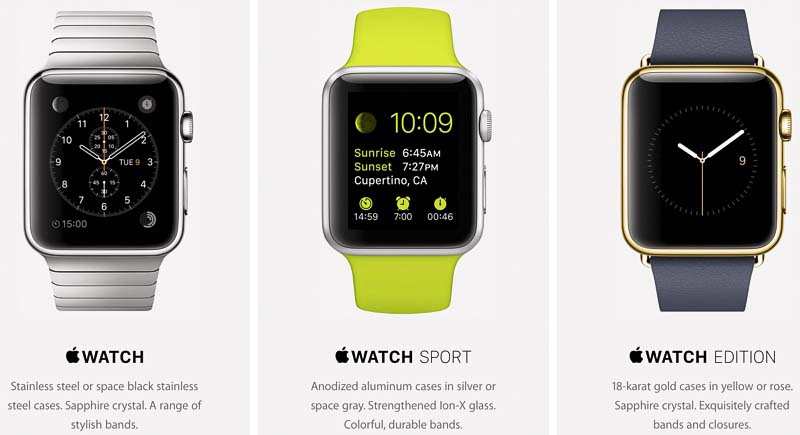 Apple makes three main variants of its smartwatch: the Watch, Sport and Edition. They range in price from $349 for the Sport up to $17,000 for the most expensive Edition. (Photo Source: www.macrumors.com)

After a couple weeks of pre-ordering, Apple released the Apple Watch to stores on April 24. It’s been available for a while now, but with the public finally using it, how does it hold up to the price tag?

Reviews and opinions of the watch are now springing up everywhere. A few defects have already been found like the difficulties it has on a tattooed wrist.

“Many factors can affect the performance of the Apple Watch heart rate sensor. Skin perfusion is one….Permanent or temporary changes to your skin, such as some tattoos, can also impact heart rate sensor performance. The ink, pattern, and saturation of some tattoos can block light from the sensor, making it difficult to get reliable readings,” Apple’s site said.

The watch costs anywhere from $349 to $17,000 for the 18 karat gold variant. There are multiple choices involved with the buying process including the size of the display, the band, and even software additions. The three main types are the Sport, Watch, and Edition. These start at $349, $549, and $10,000 respectively.

The Sport is made of a slightly more durable and colorful band. A more stylish stainless-steel Watch variant exist for the casual user. The Edition has 18 karat gold and sapphire glass for a premium look. All watches are water resistant, so they can survive the rain but can’t be submerged under more than a meter of water.

The Apple Watch features a small twistable knob, called the digital crown, on the side that can be used to zoom in or out without blocking the screen. You can also press the digital crown to return yourself to the home screen.

According to Matt Swider from techradar.com, “the Apple Watch is a unique device,” he said after reviewing it. “I couldn’t go back to life without one.”

Other reviewers are more cynical and disapproving of the device. Sophie Curtis, from telegraph.co.uk, points out the watch needs to be charged daily. This is a bit of a nuisance, but most people already have to charge their smartphones daily because. Curtis pointed out that the watch will be obsolete in a couple of years. She makes the argument that expensive traditional watches can last decades, but the Apple Watch’s battery will degrade to a point where it won’t last a full day.

“As with its iPhones and iPads, Apple will regularly release new and improved versions of the watch, and the previous versions will quickly start to feel outdated,” she said.

The new Apple Watch isn’t the first smartwatch, but it surely is the most expensive. The watch isn’t for everyone; some can’t get past some flaws and others just don’t like the design. However, Slice Intelligence estimates a total of 1.2 million units were pre ordered on the first day, April 10, in the United States alone.