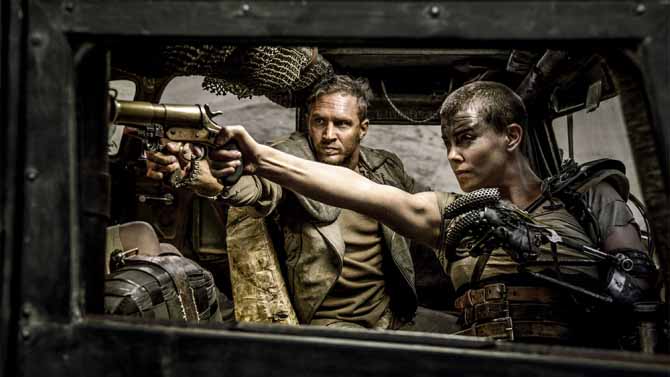 “Mad Max: Fury Road” is the fourth installment in director George Miller’s epic apocalypse series and “Fury Road” certainly aids Miller’s prestigious reputation. Beginning hectically with a chase scene accompanied by pounding drums and a hurried soundtrack. Tom Hardy has taken over the role as Max and is joined by Charlize Theron who plays Imperator Furiosa and Nicholas Hoult who plays Nux.

We quickly learn that Max has been taken captive by the War Boys and used as a “blood bag” by Nux.  As this is happening, Furiosa is driving a heavily armored war rig to retrieve gasoline. Furiosa quickly veers off road and starts heading East. In her rig, she hides the five wives of King Immortan Joe, played by Hugh Keays-Byrne, who are specifically chosen for breeding. Nux takes Max with him as he and the rest of the War Boys seek entry to the “Gates of Valhalla” which can only be achieved by retrieving Furiosa and being granted entrance by King Immortan Joe. Furiosa drives the rig into a sandstorm in an attempt to lose the War Boys and does so for a time. Max sets himself free and eventually joins up with Furiosa in an attempt to escape.

There is one deciding factor in “Fury Road” that sets it apart from all of the other action films of the year: practical effects. Too many current films rely heavily on Computer Generated Imagery, which acts as a less expensive and less time consuming way to create scale and epic proportion. This has become so common that almost every big-budget film uses CGI instead of using practical effects, but this is where “Fury Road” shines. Every vehicle and machine used in the film is real and hand crafted. Most of the stunts in the film were performed by real stuntmen. This creates a certain realism that is unmatched by today’s industry standard of action films. The acting in this film is very subtle but it gets the job done to forward the simple yet intriguing plot.

Although the film is largely a violent film it also has an emotional side that is surprisingly fulfilling. The impressive narrative coupled with the mass scale and mind-boggling action sequences make “Mad Max: Fury Road” one of the best films of the year.

Overall, “Fury Road” sets a new standard for films and will be long remembered by the audience and the professionals, that’s why I give this film the Grade: A.