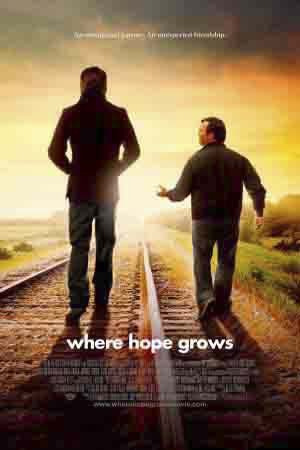 Calvin Campbell, played by Kristoffer Polaha and Produce, played by David Desanctis walk down the train tracks in the faith-based drama “Where Hope Grows.” Although the film only brought in $1 million in gross sales, it still is a must see.

A faith-based drama about a retired baseball player trying to find true happiness, “Where Hope Grows,” written and directed by Chris Dowling is a Christian film that will leave the viewer with a heartwarming message.

Calvin Campbell, played by Kristoffer Polaha, was a baseball prodigy throughout high school. When he makes it to the majors in the World Series, he freezes at the plate and ends up costing his team the game. The story follows Campbell later in life. He is living with his 17-year-old daughter who hates the fact her father is an alcoholic. Campbell relies on drinking to fill the gap that baseball left in his life.

During his weekly food restocking trip, Campbell meets a grocery store worker named Produce, played by David Desanctis. Produce, who has Down Syndrome, develops relationships with all people that come to his area of the market. He greets everyone with hugs and, “how are you doing?” Produces’ goal throughout the movie is to win Employee of the Month. “Even when I’m doing bad, I’m doing good,” he said. Campbell and Produce rely on each other for help to accomplish their goals of quitting alcohol and becoming employee of the month.

Overall, I would give this movie and A- because it has an underlying message that everyone who watches should apply to their own lives. The religious aspect of it makes it hard to understand at times if you don’t have a belief in God.  “Where Hope Grows” has some suspense and is emotion. Hopefully everyone has the opportunity to watch this movie as it does deal with the path to find happiness which can be hard to find in our own lives.