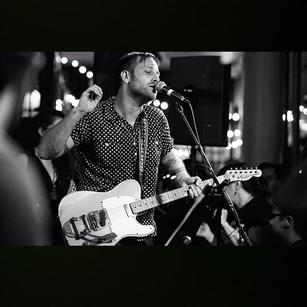 Dan Auerbach, lead singer of new rock band “The Arcs,” performs from their indie blues album released on Sept. 4. The album generated buzz due to Auerbach’s involvement in other alternative band “The Black Keys.”

Much like “The Eagles” songs from the 1970s, “The Arcs’” debut album delivers visions of Arizona sunsets and road trips in an old mustang. With their gritty but updated sound, “The Arcs” have created a combination of 14 charming blues tracks capturing the essence of revenge, moving on and fighting for love.

Started and led by Dan Auerbach, the singer from the rock band “The Black Keys,” “The Arcs” is slowly gaining popularity since their album dropping on Sept. 4 2015.

“I think Auerbach is a bit more experimental than he’s been in the past, but [the album] is a bit too similar to ‘The Black Keys,’ Ellie Meyer, senior said.

That is the one downfall of the band’s new songs. With Auerbach’s distinct voice and the rough guitar riffs it’s seems hard to picture anyone other than the alternative duo recording these songs.

While Auerbach may seem to act redundantly on the album, his gravely voice and songwriting is what makes him so powerful. The nostalgic, almost whimsical vibe that radiates from the album only adds to Auerbach’s signature sound.

One of the most dreamy songs on the album, “Put a Flower in Your Pocket,” captures the retro feel with a climactic melody and even tastes of technological sounds.

After listening to the single, Maddie Davis, senior, was intrigued by the arguably best song from “The Arcs.”

“It’s very laid back,” Davis said. “It would be fun to listen to in your car, the beat is really cool.”

At the very least, “Yours, Dreamily” can be the album you listen to until “The Black Keys” drop another genre-bending record, but let’s hope Auerbach’s side project lasts more than one album.

“I’m curious to see what else he comes up with,” Davis said.