The auditorium has dozens of support rooms 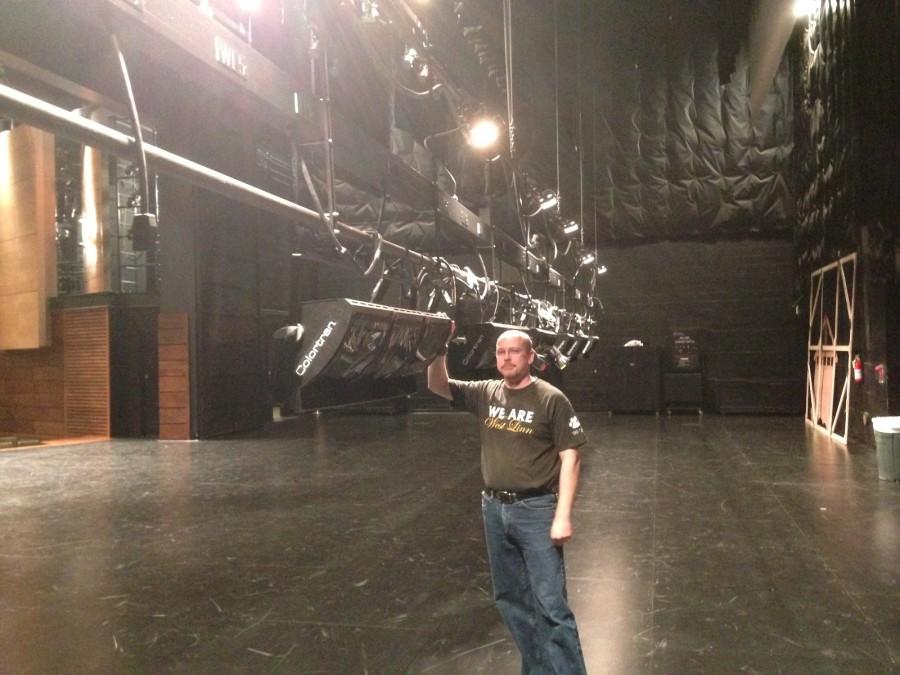 Jon Ares, Performing Arts Technical Coordinator, is in charge of, among other things, maintaining the lights by “flying them in”: lowering them into reach. He posed for this picture while giving a tour of the backstage area.

You have seen the stage on your first day of freshman year. You see it from the outside five days a week, nine months a year. You probably saw it when you watched “Oklahoma!” or any other school play. You may have even seen it when you practiced or performed.

But have you ever seen behind the stage?

The school auditorium takes up roughly half of the Performing Arts Center building and its supporting rooms take up another quarter. There are five rooms connected to the stage, but most of the students in West Linn have never even seen them.

The stage has an elaborate system of counterweights and pulleys just to control the curtains and lights. The curtains weigh roughly 820 pounds; they aren’t very thick, but their surface area is huge. The curtains are raised by releasing a lever and carefully pulling the appropriate rope hand-over-hand.

“‘Flying them in’ is what we call lowering the lights,” Jon Ares, performing arts technical coordinator, 48, said.

As  the Performing Arts Technical Coordinator, his job is to test the technical equipment, decide what technical equipment is needed for an event, organize and train students for tech operations. He says that one of his more unique pieces of knowledge is that he’s one of the only people who knows what all of the different types of electrical plugs actually do.

The counterweights have to go several feet lower than the stage itself. If they stopped at the level of the stage, the lights wouldn’t be able to go all the way up to the ceiling. The weights are accessible via a steep ladder to the weight well so weights can be taken off or put on while the lights are down.

The back wall of the stage is covered with a massive white cloth, the color of which is changed by aiming specialized, “cyclorama” lights. The lights are colored red, green and blue, respectively: the primary colors of light. This allows the tech people to change the background color during performances.

The curved segments of the walls are known as “acoustic clouds.” They’re designed to direct sound to the audience as well as bouncing just enough sound back at the stage. The back wall is curved slightly for slapback; sending a little sound back to the stage.

If you look up from the seats, you’ll see two narrow catwalks running across the ceiling. These are used to change and maintain the stage lights-the lights aimed towards the stage-but only for preparation, as they can get extremely hot during use.

“Some local fire departments have used the auditorium, the catwalks and tight spaces, as a training opportunity. They enjoy using all that high steel to practice extricating a victim,” Ares said. “We also believe the catwalks would be the best place to go in the case of a zombie attack.”

It is not, however, a good idea to climb up the ladders to see for yourself. Training is required to be allowed to climb the ladders, and they can be “really creepy if you look down,” a stage manager said.

The adjustable lights in the auditorium are 500 to 1000 watts per fixture and can reach up to 1000 degrees Fahrenheit. For this reason, all of the curtains are covered in a flame-resistant substance. This also means that students are not allowed to ever directly touch the curtains, for fear of rubbing off the fire-resistant coating and/or getting oil from their fingers on the fabric. There is also no jumping off the stage.

“There are some really strict rules that the theater kids are really weird [firm] about,” Brianna Papish, senior and a member of the Thespian Troupe, the Honor Society drama club said.

Backstage, behind the actual curtain, is the prop table. Its outline on the floor is drawn with Sharpie, and during shows, all props are fitted together.

“It’s just like a jigsaw puzzle so people can run in and grab things,” Papish said.

Attached to a hallway behind the stage lies the Green Room, where actors can snack during intermission. It’s also, as Papish put it, a hangout room while you’re in the show. During a production, it hosts a TV showing a live feed of the stage so actors can view what the others are doing and watch for their cue.

Also in the PAC building is the costume room. It consists of two rooms, one on the first floor and one on the second. The bottom room is where all measuring and sewing takes place, while all of the clothes are stored on the upper floor.

“It’s like Goodwill, with all the racks of clothes,” Papish said.

There are several storage closets, with chairs, benches, large sets and above all, props.

Papish says that there can be some funny items backstage, especially during a show. There are nearly always notebooks filled with gibberish, from when actors have to pretend to write during a show. Frequently, actors fill the pages with words that do not have PG ratings.

There are also some odd props, such as a typewriter without an ink roll and multiple rubber chickens.

“The rubber chicken is used actually way more often than you’d think,” Papish said. They use them by trying to fit the prop into performances, especially one particular, “classic,” chicken.

Papish also says that she wouldn’t be very surprised if there turned out to be a valuable antique mixed in with the props.

“You probably could [find one]. There’s some really old stuff there,” Papish said. There are many prop photos of Betty White, former WLHS graduates and various random celebrities.

“There is definitely some weird stuff,” Papish said.

There’s the paint room, also known as the scene shop, where Ares and students cut and paint wood to build sets from scrap.

Finally, the orchestra pit is where the accompanying musical instruments are played. The pit is normally covered with plywood, but when it’s removed for a show, a safety net remains just in case a prop rolls off the stage.

The auditorium is fairly new, having been built in 2006 to replace an old auditorium that was half as large and poorly-designed. The audience can consist of up to 600 people.

“It’s really really expensive and we’re not gonna get another one anytime soon,” Papish said.

“I would like to say that I care about the auditorium a lot. It’s a really nice auditorium, and that’s why we want to keep it nice.”