Scripture at WLHS understood in a new light 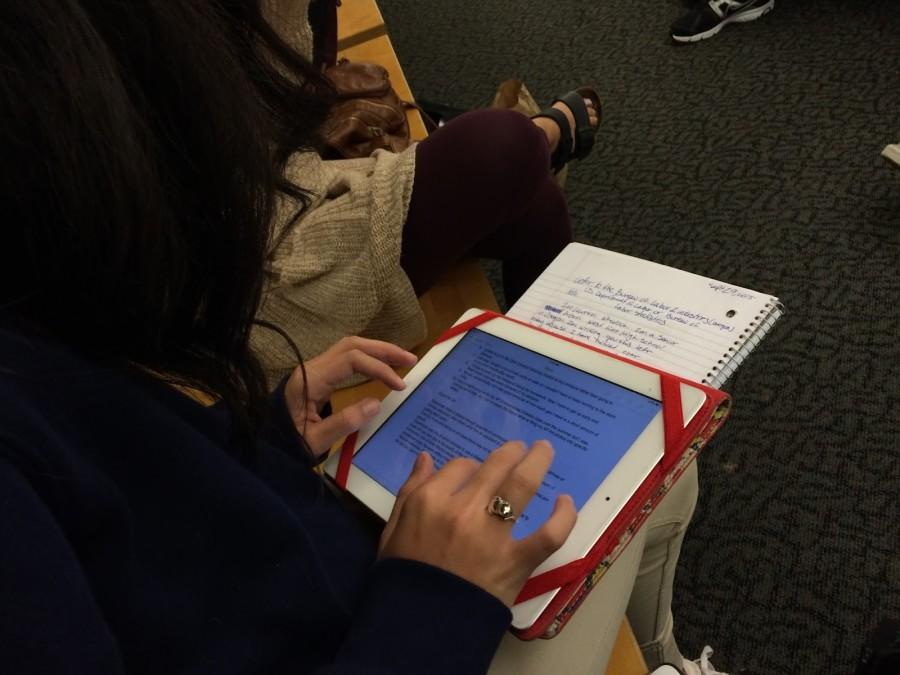 Lauren Wheelock, senior, writes and types her homework for Economics during passing time. Wheelock prefers typing but is open to expressing her ideas through her handwriting the assignment.

Under all circumstances we appear to be different, but how we understand our differences does not go without notice and how we write can change our perspective of how we see ourselves. This study on graphology appears to be obsolete in terms of provable evidence, but that does not dismiss its interest and value to the general public especially in the classroom.

Barbara Murray, English teacher, claims there is a difference in handwriting and even supports her claims with some historical observations.

“Handwriting contrast is definitely an interesting concept that seems to be a universal thing,” Murray said, “like fingerprints.”

Students like Lauren Wheelock are sometimes faced with the decision of typed versus handwritten, given that a teacher does not request a specificity.

“I generally prefer typed work rather than written because it’s a lot more efficient, but it’s always good to handwrite things because I remember them more,” Wheelock said, “especially things like notes.”

Studies all over the world have thought the general style of scripture correlates with personality, mood and much broader subjects like race, gender and age.

“The vehicle in which we deliver our thoughts tells a lot about a person, as an English teacher I prefer typed writing so that there is no obstacle in grading,” Murray said. “Because it’s important to critique a person not by style but by content.”

Although that doesn’t stray from Murray’s decisive preference to study and enjoy the different characteristics of her students handwriting. Some of the few hand-written papers she’s had the privilege of grading suggest raw and unfiltered thoughts, something important in the learning process of the writer.

“Once I had a student that never used curves with their letters,” Murray said. “They only used hatch marks seemingly making the words a lot harder to read — I didn’t know where one letter ended and the next started.”

In parallel to the subject, spelling definitely affects the attitude of the reader, but not always as you would expect.

“In my opinion, spelling is obsolete,” Murray said. “I try not to relate spelling and grammar issues to the writer in a negative connotation, in fact I think it gives character to the writer and enforces his or her concept on the subject at hand because they’re not necessarily focused on the vehicle on which is delivered.”

Like most experienced critiques, Murray agrees with the correlation in age and scripture, especially spelling. Due to the education system and advancing technology children, particularly students, have been born into privileges that don’t require the struggles of things like cursive, typewriters and lack of spellcheck.

“I definitely think the ability to understand and interpret cursive is a age-related concept,” Murray said. “Students don’t have the same experience of earlier taught children who were required to learn and perfect cursive, like me.”

“I know how to write cursive for the most part,” said Wheelock. “but I think it’s easier to print handwritten sentences for clarity.

Although it seems as though one time or another we have developed the misfortunate self-conscious feeling towards our own handwriting, greatly impacting how we tend to write in the future.

“When I was in middle school it was important for girls to decide whether or not they would astrec their ‘I’s or heart them,” Murray said.

However, probably one of the most important key factors to scripture is how it develops with age. For every writer it defers, but it is inevitable process that shows our confidence and thought process. It’s understood by the general population that we tend to perfect handwriting with experience and age, but new studies suggest that this remark has become irrelevant as a new correlation proves brilliant minds behind messy handwriting.

“I’ve noticed that my handwriting has become increasingly more messy as I’ve grown,” Murray said. “I also noticed that I write a lot faster, but that’s probably in parallel with my sloppy handwriting.”

Statistics in the media provide many general graphology correlation factors that relate a writer to his/her handwriting, but none can be discriminated because everyone desires their own personal style that fits their character.

“I love reading student’s written though,” Murray said. “It gives me an idea as to who they are as a person.”