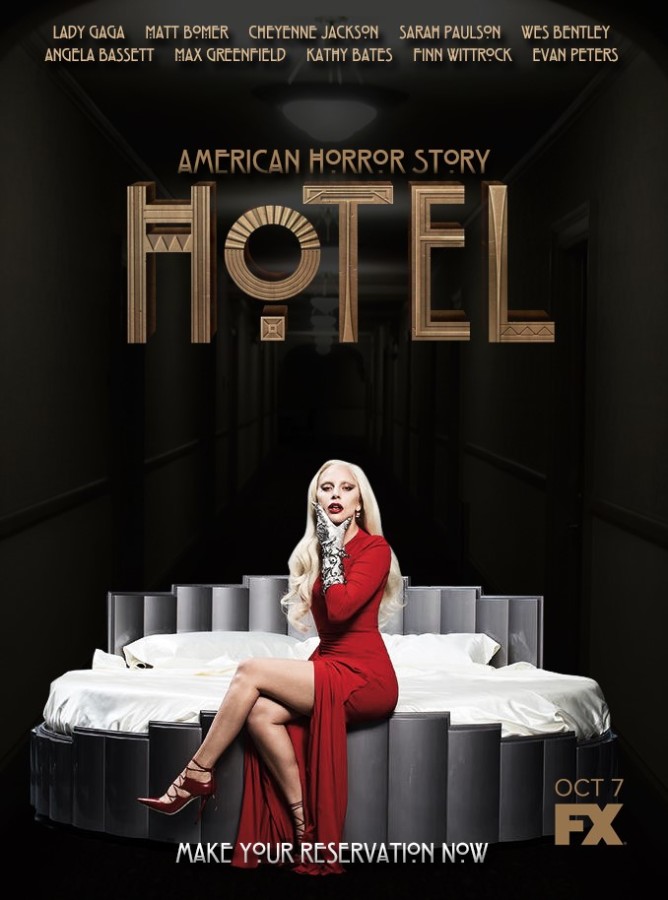 “American Horror Story” returns for its sixth season; “Hotel.” The new season stars the recurring main cast, with the exception of Jessica Lange, and has a completely new gruesome storyline about an eerie hotel.

Ever since the premiere in 2011, “American Horror Story” has sparked a cult following with it’s deranged characters, unique storylines and macabre theme. With the premiere of the fifth season, “Hotel,” rises above fans’ expectations and has everyone talking about what seems to be the most morbid and capturing season yet.

As with every season, “Hotel” mostly consists of the recurring main cast, which includes Evan Peters, Sarah Paulson and Kathy Bates. However, the most important character of the show–Jessica Lange, is missing. When I first heard the news that Lange wouldn’t be in this season of “AHS” I was distraught and was even more angered when I found out that pop singer, Lady Gaga would be Lange’s replacement. Lange had been such a huge part in the series over the years that I assumed the show wouldn’t be worth watching without her. Despite my disappointment with not seeing Lange play the leading role, I now understand why she wasn’t casted for the part in this season. Gaga’s dark twisted personality, both on and off screen, with her alluring look, fit the show like a glove. However, despite Gaga’s capturing look, her acting falls flat in comparison to Lange–resulting from her lack of experience with acting. There are rumors that Lange may make a surprise appearance later in the season and all “AHS” fans, hope this is true.

Throughout the first episode we witness numerous guests check in, and never check out of, the infamous–room 64. Many violent scenes occur in the room, one rape scene in particular has became very controversial among “AHS” viewers.

Having these extremely graphic scenes isn’t a new concept to “AHS,” in fact, they have always been present and always have caused issues. I don’t understand the theme of sex going along with gruesome events, specifically torture in the show. I know, the show could convey just as much terror and attention without such graphic scenes.

It’s not until later in the episode when Gaga finally makes her arrival with her lover, played by Matt Bomer. The two get ready before going out to find their next victims to take back to the hotel. Once the pair has successfully lured their victims to the hotel, Gaga puts her killer accessories–a pair of diamond gloves with razor sharp claws, to use. She slices the victims throats and then proceeds to feast on their blood, with the help of Bomer.

“AHS, Hotel” showcases its seamless gory effects, ravishing costume and makeup, as well as stunning visual images of the eerie hotel spectacularly. In addition, it does an amazing job with character development and with music choice. Perhaps one of my favorite aspects in the first episode of “AHS, Hotel” is when the ending scene slowly fades while “Hotel California” by the “Eagles” plays in the background, reminding us that “You can check out anytime you like, but you can never leave.”

With all of this in mind I rate “American Horror Story, Hotel” an A-; the only thing preventing me from giving a higher grade is the unsettling amount of sexual torture scenes.