“Of Montreal:” a one-of-a-kind creative experience 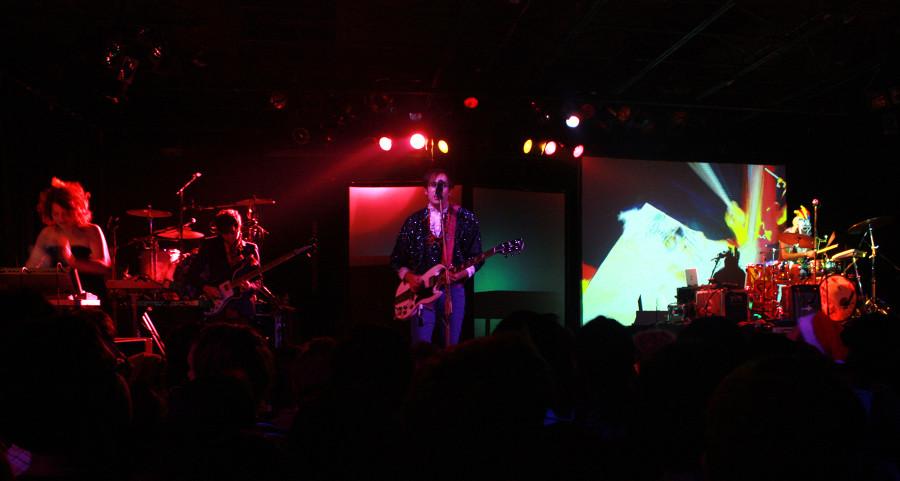 Playing on tour for their 2015 album “Aureate Gloom,” “Of Montreal” incorporated lasers, actors and huge colorful props perfectly with their psychedelic songs. The 20 year old band brought old and new fans to the Wonder Ballroom in downtown Portland Nov. 1.

On Nov. 1, the genre-bending pop band “Of Montreal” brought devoted fans to the kitschy hole-in-the-wall Wonder Ballroom in downtown Portland.

The second the lead singer and mastermind behind “Of Montreal,” Kevin Barnes, played the opening riffs for their dark dance hit “Basem Sabry,” the audience was jumping. Experimental sounds, circus-esque skits and Barnes’ effervescence on stage, combined for the best concert on a Halloween weekend.

“Of Montreal’s” love for theater, comedy and pure entertainment shone through the hour and a half set perfectly. Not only were the well executed effects and weird characters dancing in the crowd eye catching, but lighthearted mockery of politicians and references to current events took the concert beyond art. The colorful skits and props could have easily gone overboard, but with Barnes’ entrancing groove, he never let it happen.

An obvious natural born performer, Barnes command of the room was subtle but strong, making us feel like the night consisted of a beautiful and chaotic look into his life and mind. While he joined in on the fun happening on stage, his vivacity was mixed with sadness. The final song, “The Past is a Grotesque Animal,” a 12 minute climactic trip about a relationship and inner conflicts, is one of Barnes’s rawest–one that only a chronically melancholy person could create.

The most important touch to “Of Montreal’s” performance was their unapologetic manner. As Barnes sang about sexuality, relationships, mental health and parenthood, he never lost touch of his vulnerability and the strength he accompanies with it.

Much like their subject matter, their music explores nearly every genre while going to a place where there is no genre. Best described as psychedelic funk, “Of Montreal” plays with rock, techno and pop flares. Over nearly 20 years, their discography has developed into a grittier, more instrumental sound.

“Of Montreal’s” surreal concert was nothing short of a riot.

They masterfully captured everything a fan could want–taking us to another plane with their experimental sound all while showing us the core of what makes us human.