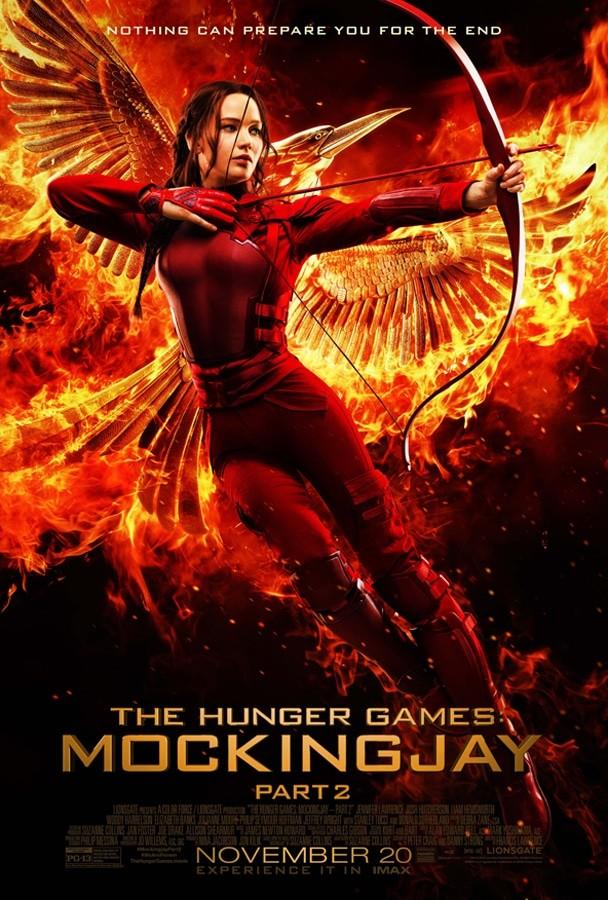 Photo Courtesy of http: //www.thehungergames.movie/ “The Hunger Games: Mockingjay Part 2” came the a thrilling conclusion featuring Academy Award winner, Jennifer Lawrence. The movie showcased some of the better acting of all the movies along with a lot of action rather than talking.

The beloved book trilogy, “The Hunger Games,” comes to a thrilling finale with “Mockingjay Part 2” released.

Katniss Everdeen, played by Jennifer Lawrence, is in the hospital recovering from a neck injury sustained when Peeta Mellark, played by Josh Hutcherson, strangled her. This was due to his torture while in the Capitol by President Snow, played by Donald Sutherland. After the first few minutes of the movie, the movie picks up and the action doesn’t stop until the end.

Lawrence, as usual, was truly incredible in this movie. She captured exactly what Katniss was feeling and portrayed it perfectly. Despite being virtually absent from the first film, Hutcherson came back strong in this movie, showing each side of Peeta excellently.

This movie was not the strongest in the series, but it definitely surpassed the previous movie. The acting was less one-dimensional and had more emotion. Each of the characters seemed to have their own personality, which was lacking in the first movie. Liam Hemsworth’s character, Gale Hawthorne, seemed much less mono-toned in this movie. Hemsworth conveyed emotion toward the end when he talked to Katniss and began crying. Sam Claflin reprised his role as the stunning beauty Finnick Odair, which lightened the film with his humorous remarks throughout the movie.

With the plot of the Hunger Games gone, “Mockingjay Part 1” seemed to be weakened by this, but Part 2 rose out of its ashes and didn’t let the lack of the Games defeat it.

I would give “Mockingjay Part 2” an A. It was a strong movie and the perfect to conclude the series. After seeing the movie, leaving me happy as to how everything resolved, even though there were some devastating character deaths. I appreciated how this movie had more action and stayed very close to the original plot of the book.