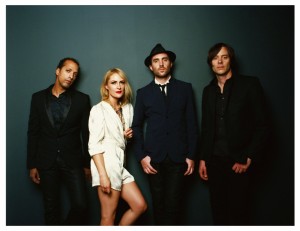 After five albums and nearly 15 years of performing, the popular underground alternative band  “Metric,” struck the indie rock scene with another hit record, “Pagans in Vegas,” in Sept. 2015. The sophisticated album, which features their gritty synth-pop at it’s best, sparked a winter tour and even two gigs in Oregon on Feb. 19 and 20.

Before their Eugene performance, they stopped at the Roseland Theater in downtown Portland with “Joywave,” the opening band on their tour and fellow indie rockers. The young and quirky group of five guys that make up “Joywave” began their set precisely at 9 p.m. While their performance, which featured several cool songs featured on Portland’s 94.7 radio station, was pure fun from start to finish, the audience anxiously awaited the arrival “Metric.”

The crowd, which featured a demographic mostly over the age of 25, including a woman in her sixties, was overcome with awe the moment front-woman Emily Haines took the stage. Her high but gravelly voice that opened with “Help I’m Alive” is just as beautiful on stage as it is studio-recorded.

Not only was she commanding enough, the band even brought several VIP attendees onstage to sing an acoustic version of their song “Dream So Real.” Each member seemed to enjoy every moment as the audience passionately sang along with the calm and catchy chorus.

The mix of “Metric’s” humbleness and mesmerizing stage presence made for one of the best concerts a die-hard fan could hope for. From the overpowering smoke and bright lights to the hypnotic synthesizers, “Metric” put on a rock show on par with the Moda Center, not the small and intimate Roseland Theater.

While their performance of past hits like “Youth Without Youth” and “Gold Guns Girls” were crowd favorites, their delivery of “Pagans in Vegas” was the most exciting to witness. As Haines walked around the stage in a black and gold sparkling cape while belting the chorus to “The Shade” you couldn’t help but be beside yourself with exhilaration.