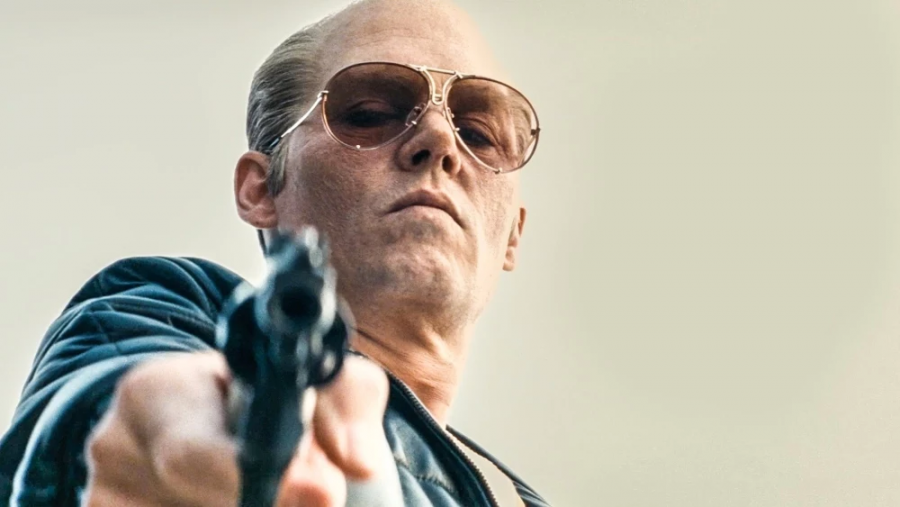 Johnny Depp takes a promotional picture as his crime lord character James “Whitey” Bulger. Achieving good scores across the board, this harkening back to the classic gangster movies of the past hit theaters on Sept. 18 2015. The dark and character driven film easily kept watchers engaged for its two hour and two minute running time.

One moment he’s shaking your hand and lying to your face, the next he’s having you gunned down, and later that night he’s tucking his son into bed, showing genuine love for his family. After fifteen years of characters like Captain Jack Sparrow, the Mad Hatter, and Barnabas Collins, Johnny Depp departs from his regularly silly roles in order to personify one of America’s most brutal and chilling criminals, James “Whitey” Bulger, in the September release: “Black Mass”. This gritty film tackles the themes of family, police corruption, perverse senses of honor, and violence, over the course of a brilliant two hours and two minutes.

This character driven film is set in South Boston, lovingly referenced as “Southie” by its inhabitants, and is initially set in 1975, later progressing on to 1981. The story follows Whitey and, his brother, Billy Bulger, the crime lord played by Johnny Depp and the chief senator played by Benedict Cumberbatch, as well as John Connolly, a cop turned to corruption, played by Joel Edgerton.

The story is told through a clever usage of switching between present day, which is made up of the confessions of those who worked around Bulger and Connolly, and the past events that show, in detail, the events discussed in the interrogations. The story begins, and within the first five minutes, the attention is squarely focused on Whitey. Early on, he may be willing to order murder done, but his love for his family is palpable, a particular scene in which he gives his son genuine advice standing out. Soon after this point, John Connolly, a Southie childhood friend turned FBI Agent, entreaties Whitey to “make an alliance with the Feds” by turning informant. After much tribulation, Whitey agrees and becomes an informant. The story then leaps to 1981, when Whitey has started to play both sides of the crime war for fools, working with Connolly to advance both of their careers. Tense drama and horrible acts of violence start to take their tolls on all involved as the film creeps towards its inevitable and abrupt end.

The cinematography of this film is superb, being a perfect example of how unnecessary sprawling vistas or intense visual effects can be. Violence is short, brutal, and chilling, and every single shot of every single scene is tight, close to, and focused on the faces of the actors, the only exceptions being when the actor’s body is being highlighted or when the the camera follows one man who is about to commit murder, close to the shoulder. This cinematography perfectly highlights the actors, who proved to do an outstanding job at embodying their characters. A notable example of this being when the camera focuses exclusively on the face of Steve Flemmi—played by Rory Cochrane—as he watches, without lifting a finger, his daughter being strangled by Whitey, the deeply disturbing emotion palpable upon his face.
Rory Cochrane, however fantastic his performance, was not the only good actor. Johnny Depp is one such example of an actor who did superbly. Depp took upon himself the task of personifying a real crime lord who committed actual crimes and murder and he immersed himself completely. Depp’s calm, cold, and vicious portrayal is incredible, especially as he has played nearly no serious roles in the film industry since the year 2000, and those he has played have been adequate, but not inspiring performances.

Depp, in order to try to capture Whitey’s life and emotion in “Black Mass”, did extensive research on him through archival footage, for he wanted to be as true to the actual man behind the name as possible.

“The first thing for me was to understand him first and foremost as a human being,” Depp told reporters on the red carpet. “Anybody and everybody, especially the families of his victims, could say ‘He’s just an evil person.’ I don’t believe that exists. People have their humanity, everything they’ve carried with them since they were children. There’s a side of James Bulger who is not just that man who was in that business.”

Without this film’s excellent actors like Depp, brilliant cinematography, and time-appropriate sets, it would most likely have been simply yet another gangster movie. With these superb elements, however, the film proved to be a darker and more serious harkening back to one of the gangster movie classics: “Goodfellas”.

Despite all of its wonderful elements, the film has some flaws. Namely, many characters are partially glossed over, receiving little screen time, where they could have been more fleshed out given more attention. Other than this gripe, the film is extremely impressive and has earned its score of eight out of ten—well above average. It should be a definite see for anyone who loved “Goodfellas” or “The Godfather”, as it is a more contemporary take on their style, and is beautifully dark.