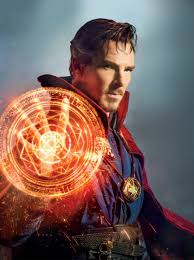 If someone were to read the script of “Dr. Strange”, the latest entry in Marvel’s creative universe, the response probably wouldn’t be great. Sure, the story has some decent jokes, but the plot is familiar. We’ve seen similar stories with “Thor”, “Captain America”, and especially “Iron Man”. Perhaps this is true. But this movie wasn’t just Iron Man redone, it was Iron Man, as covered by Pink Floyd. On acid.

“Dr. Strange” is a fast paced movie, starring Benedict Cumberbatch as the distant, arrogant, and talented Doctor, Stephen Strange. Strange suffers an accident that renders his hands unable to perform surgery and sets out to find a healer who can fix him. From this point, the movie takes off at lightning speed towards superhero shenanigans.

For those unfamiliar with the original Dr. Strange comics, the second act will be something of a shock. I missed most of the expositional dialogue because I was busy trying to figure out if my popcorn was laced with LSD. I was later informed that the initial “Dr. Strange” comics were written at the height of the 1970’s drug craze. It turns out, the problem wasn’t my popcorn, but instead the dedication of the CGI department. For the first time, movie directors have access to the graphic tools to capture the hallucinogenic qualities of the comic. “Dr. Strange” seems to borrow from “The Wall” (1982), “Matrix” (1999), and, most clearly of all, Christopher Nolan’s psychological thriller “Inception” (2010) .

“All props to [Cinematographer and Director of photography] Ben Davies,” Explains Mike Gorgone, Co-host of comics podcast “Panel on Panels”. “He clearly has an eye for making CGI and live action work together. The director, Scott Derrickson also deserves a lot of credit, of course. He also helped write this movie, so he was clearly had a part to play in the design and visuals.”

In addition to stunning cinematography, the movie has a star studded cast. Benedict Cumberbatch (“Sherlock”, “Star Trek: Into Darkness”) is believable in a different role than he usually plays, even managing to speak with an American accent. Tilda Swinton (“The Deep End”)is mesmeric, rising above the controversy of her casting to provide a magical and powerful display. Mads Mikkelsen (“Hannibal”, “Casino Royale” puts in a strong performance as the villain, Kaecilius. The supporting cast of the movie is fantastic. Chiwetel Ejiofor (“12 Years a Slave”)  is a show stopper as Karl Mordo, and Benedict Wong steals the show as Wong, the mystical librarian.

The movie does have one glaring flaw, it’s criminal misuse of Rachel McAdams (“Mean Girls”).  McAdams is misused as an unimportant hero’s girlfriend. It carries on a disturbing trend of Marvel movies wasting fantastic female actors in small roles. Despite limited screen time and next to no character development, Mcadams manages to remind the audience of her acting chops by delivering some of the best comedic lines of the film.

The movie has flown out of the gates, making 43 million dollars this past weekend. It’s yet another hit for Marvel, who have been on an incredible streak of producing quality movies.

That isn’t to say “Dr. Strange” is perfect, it follows the same basic formula of every superhero origin, and at times, it seems to skip too quickly over important plot points. But the fun plot, entertaining dialogue, and incredible acting more than cover up any plot failings.

This movie is well worth seeing in theater. The acting is fun, the mood is outlandish and wild, yet somehow grounded and believable. The script is lightning quick and filled with jokes, and the CGI is some of the best you’ll see anywhere.