Next group of thespians makes debut at Middle School Musical 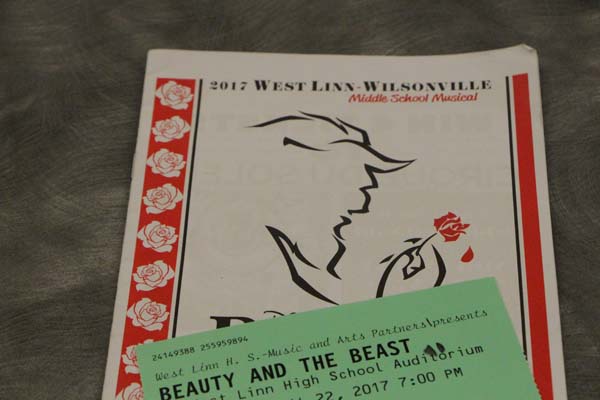 Premiering on Apr. 20 and running until the 25, the Middle School Musical production of “Beauty and the Beast” dazzled audiences with elaborate costumes and impressive acting. “This year we had a very minimalistic set, which isn’t normal, but the costumes were really extreme,” Lane said.

While the annual Middle School Musical put on by the district isn’t notorious for bringing stars into the high schools, this year’s production of “Beauty and the Beast” could be the big exception. Students who performed in the show caught the attention of their audiences with their good pitch and acting skills, namely stars Kaiya Shivers, K Cast Belle, Aymeric Burthey, K Cast Beast, Brigitte Chenevert, B Cast Belle, and Ryan Snyder, B Cast Beast.

“This year was a lot better than past years,” Gillian Lane, sophomore, who has been involved in a total of five Middle School Musical productions, said. “The acting was really impressive.”

Lane wouldn’t be surprised if leads from this show went on to become thespians at their respective high schools in the coming years, especially considering what happened this year.

Overall, the show was very impressive. Although the sets were more basic than in past years, the set changes flowed incredibly well. Many West Linn students helped out backstage, with production, in the orchestra and other ways.

The eye-catching costumes and dramatic makeup proved just how much effort students put into putting on a great show.

There were a few technical difficulties that lowered the quality of the show, specifically the 7 pm showing on the 22.

“We didn’t start working on sound until two days before the first show,” Lane said. “It caused a few technically difficulties. There was also a point in the late Saturday show where Belle’s mic totally blew out. It was because we’d had a show earlier in the day and the mic didn’t have time to fully recharge in between shows.”

Despite a few setbacks, the hard work payed off. The show’s impressive costumes,makeup, acting, sets and singing really set it apart from other shows.