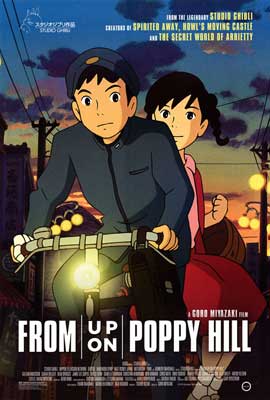 Following your father’s footsteps is generally a hard task to do. But if your father is the most successful film-maker of the mecca of animation, Japan,–well, let’s just say it’s a lot harder. However, Goro Miyazaki, son of Hayao Miyazaki, co-founder of the top animation studio, Studio Ghibli, and a Studio Ghibli director, has taken up animation film-making and produced “From Up on Poppy Hill”.

“From Up on Poppy Hill” is set in 1940s Tokyo, Japan and follows the life of Umi Matsuzaka (voiced by Masami Nagasawa and dubbed by Sarah Bolger). Matsuzaka is the eldest sibling in a family of five and has been raising signal flags that read “I pray for safe voyages”  by a poppy hill in Yokohama Bay since her father went missing in action during the Korean War. In high school, Umi finds herself involved in a student movement seeking to prevent the demolition of an old club house, The Latin Quarter. In the process, she falls in love with Jun Kazama (voiced by Jun’ichi Okada and dubbed by Anton Yelchin), the newspaper club president who responded to her signal flags, only to find out that they may be related by blood.

The artistic skill and animation adroitness of Goro Miyazaki is similar to his father’s. Paying special attention to human habits like fumbling with clothes while hanging them and adjusting hand grips while holding an umbrella are just a few. The animation also mimicked oil painting in a particular scene did a fantastic job of it by featuring the texture and subdued color of the medium. Since the story is set in the 1940s, the animation also featured tools, specifically kitchenware, from back then with stone rice cookers and non-electric stoves lit with matches.

The voice acting in the original Japanese version is much more expressive than the voice acting in the English dub version, which makes sense as the animation was made to imitate mouths speaking Japanese. One of the downsides in general with english dubbing is that some of the humor, like puns, found within the original language is lost in the dubbing process. Therefore, I found myself laughing more when watching the original Japanese animation. However, the original dialogue of the characters is preserved. Both characters expressed their affection for each other in timid ways by making eye contact and subtle blushing which I found to be more elegant than occidental sonnets of love.

Overall the movie is about a feel-good, romantic tale. I had a hard time finding the moral of the movie and symbolism of the signal flags and relationship of the two main characters, but it was still enjoyable. The animation is not up to par with Hayao Miyazaki’s, but definitely has potential and is charming in its own way. I give this movie three and a half stars out of five.