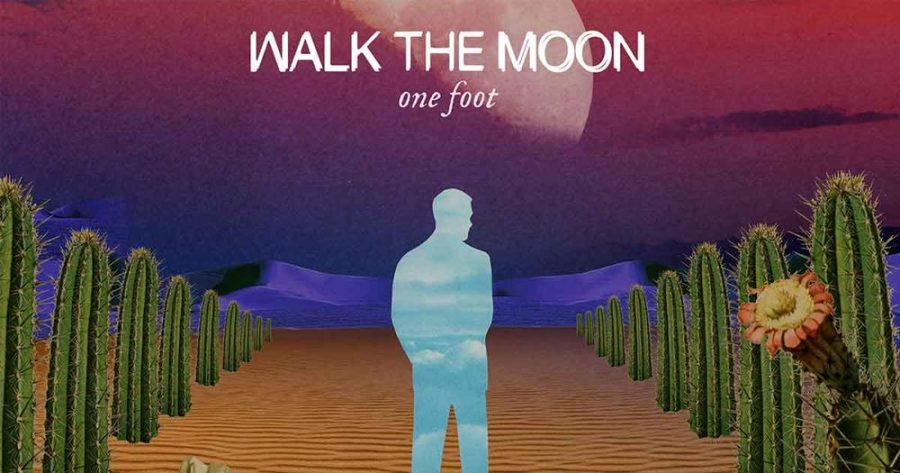 New single art from Walk The Moon single ‘One Foot’, previews the style of the new album.

Pop powerhouse, Walk The Moon, awoke from their two year musical slumber this last week with a powerful new single called “One Foot,” that sets a new tone for their upcoming album release. “What if Nothing,” coming out Nov. 10, is Walk The Moon’s third album and by now, they have a very dedicated fan base behind them. After “Shut Up And Dance,” the smash hit that resounded over party speakers and sports arenas alike, Walk The Moon has an image to uphold and many devoted fans to their name. “One Foot” is a track that’s already gaining traction with new and old fans alike, and is sure to be a hit.

As a band that promotes good vibes and happiness to its listeners, the single follows that dichotomy by using high energy and toe tapping beats that grow more infectious the more you listen. The peppy song, with its catchy chorus and optimistic rhythm, is sure to be a track that fans will enjoy in Walk The Moon’s loud and ethereal concerts.

If you’re unfamiliar with the band, this track may not be good as a standalone, not showcasing all of the potential and talent that is in some of the other band’s work, like their self titled album “WALK THE MOON.” However, the track is sure to get stuck in your head.

Fitting for their comeback, a colorful and flashy music video true to their lively nature was released days following the release. Walk The Moon danced their way into everyone’s hearts with their sophomore album “Shut Up And Dance” and their new single is, while a little different that the rest of their work, doing a great job on music charts. Already ranked 31 on the itunes charts since last Friday and with Billboard analysts predicting the tracks emergence on the Hot 100, it doesn’t seem that Walk The Moon’s dominance over the alt pop scene will be slipping anytime soon.

Walk The Moon has already proved themselves as a more than capable band with unique and inspired music, and this new song is no different. While not being the strongest song in their music repertoire, the single “One Foot” still manages to captivate listeners and get them into the groove.  Check the song out on streaming services like Spotify or anywhere you can get you hands on it: https://open.spotify.com/track/3yWsWi2PAo9s6elIhnywIS

Walk The Moon is touring with their new album “What If Nothing” this winter so grab tickets to one (or both) or their two Portland dates here: http://www.walkthemoonband.com/#tour-1

Also take a peek at the imaginative music video for the track here: https://www.youtube.com/watch?v=05v4nfUmBYI