Who dat boy? Tyler, the Creator of course 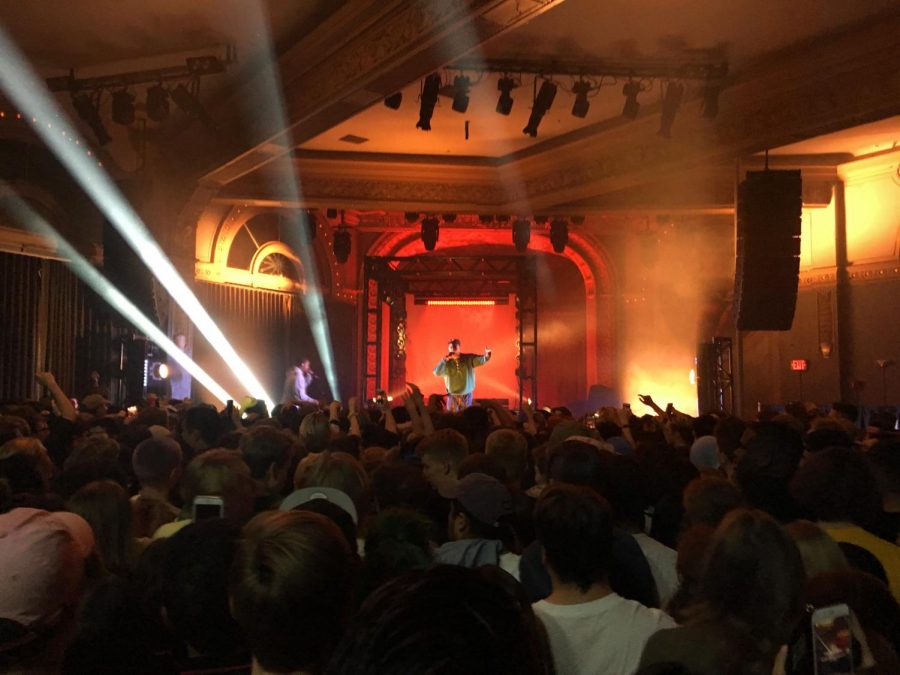 Fans crowd around the stage at the Crystal Ballroom to get the best view of Tyler as he performs "Glitter."

On the evening of Nov. 5, the curtains fell back revealing a rap legend. Tyler, the Creator greeted Portland with “Where This Flower Blooms,” the second track off of his beloved new LP “Flower Boy.” From there, he performed a plethora of fan favorites, both old and new, to the delight of the mass of enthusiastic faces crowding the ballroom floor. Fans enjoyed a very diverse set list, including “48,” “Boredom,” “IFHY,” “911,” and even a Frank Ocean cover, “Biking.”

Featuring new songs, old songs, popular singles, lesser known tracks, abridged versions and extended versions, this show had it all in the bag. The most memorable moment of the show by far, was a much-anticipated and high-energy rendition of “Flower Boy’s” lead single “Who Dat Boy.” As soon as the instantly-recognizable first “pop” sounded through the venue, the crowd shrieked, squirmed and pushed, forming an enormous circle in the middle of the floor. Tyler’s more raucous followers whipped off their shirts and prepared for an absolute bloodbath of a mosh pit.

The only downside to the evening was the show’s duration. After making the audience wait for nearly two hours, they only received about fifty minutes of music in return. That being said, the final moments of the show reminded fans why they worship their “creator.” “Who Dat Boy” was immediately followed up by the appropriate “November,” and then from there into the anthemic “Glitter,” followed by hit single “I Ain’t Got Time!” and finally, Tyler wrapped things up with an extended version of the beautiful “See You Again,” before suddenly shouting, “Goodnight, Portland!” and departing from the stage.

They say you should leave your fans wanting more. Tyler certainly did this, although I think most would agree that he could have played for another hour or two. Despite the briefness of the concert, it was an amazing performance, and it would be hard to find a better way to spend $30. Felicia the Goat has done it once again.