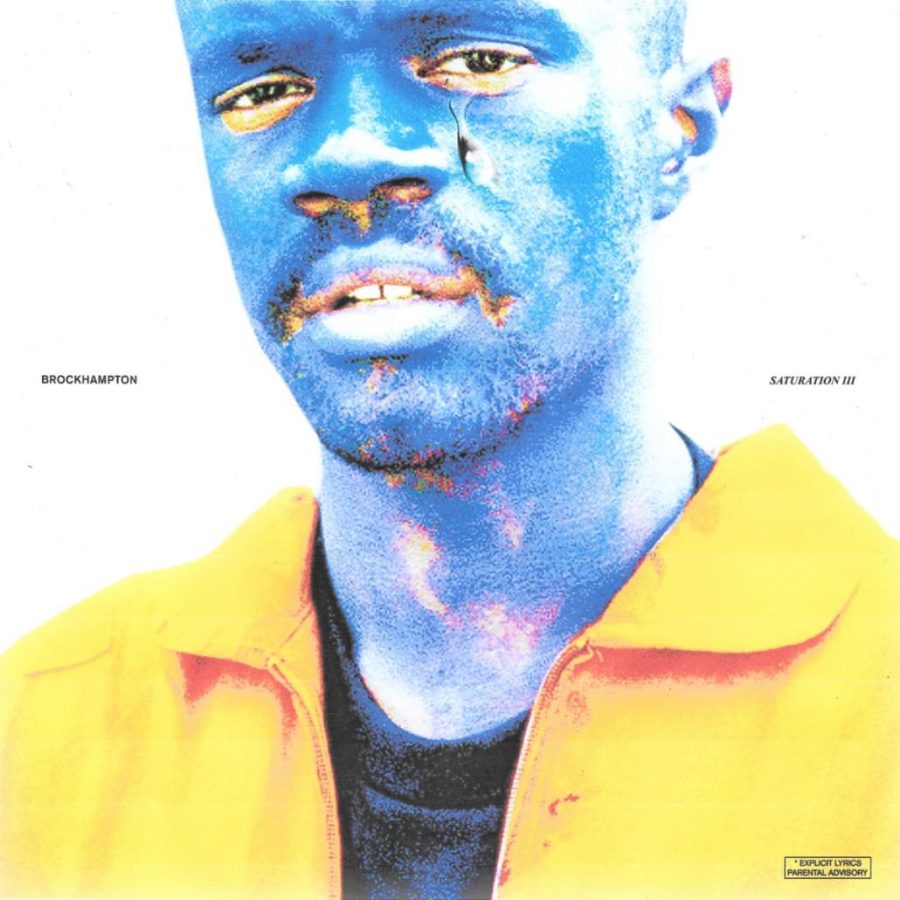 Feeling Blue: The cover of “Saturation III” features rapper Ameer Vann, painted blue again, similar to the cover of the first “Saturation.” Many of the group’s videos also feature the entire group painted blue. The idea behind BROCKHAMPTON’s repeated use of blue face paint is to give the illusion of an over-saturation of color.

If you haven’t heard of BROCKHAMPTON by now, you must not be a hip hop fan. The young collective of rappers, singers, artists, producers and more met on a Kanye West fan forum, before moving in together and releasing what no one expected was going to be a trilogy of critically-acclaimed, alternative rap albums in the second half of 2017. Appropriately named the “Saturation” trilogy (as in “saturating” the music scene), the sheer amount of music this self-declared “boy band” released in such a short time made them virtually impossible to ignore, despite being self-produced on an independent label, with no members older than thirty.

The only thing more impressive than this innovative business tactic is the fact that all three “Saturations” are actually fantastic albums. Their innovative, genre-bending ideas, progressive lyrics, and hard-hitting, whacky beats have given them an instantly recognizable sound in a scene that is full of monotonous, up-and-coming, so-called “landfill” rappers.

If you enjoyed the first two “Saturations,” you will probably like “Saturation III” as well. Sadly, the best part about this album is also the worst part: it’s more of the same. The eight vocalists mostly address the same topics in this project, with often times very similar flows, and no significant development of their rapping “chops” since the release of “Saturation II” (with the exception of the phenomenal Matt Champion). It is a brilliant style, but by the third full-length album, it starts to feel a little bit too stale.

Despite a lot of repetition, this release certainly does do some very new things that may have listeners excited. The beats on this project, in particular, set themselves apart from previous albums with new motifs that run throughout the album, such as the rewinding sound effect that plays at the end of nearly every track, and the high-pitched theremin squeals that we hear on tracks such as “BOOGIE” and “ZIPPER.”

Some fans will be thrilled to hear a lot more of Joba on this release. The young singer and rapper who has cemented his boy-band role as “the psychotic one” is heavily featured on “Saturation III” – especially his singing voice. Tracks like “HOTTIE,” “SISTER/NATION” and hit single “BLEACH” become instant classics when his vocal line comes in.

In the context of BROCKHAMPTON’s previous releases, the themes and styles on this album begin to sound a little bit dry. For that reason, “Saturation III” is probably the weakest point in the trilogy. That being said, it is hard to dislike this album, and many tracks on here are just as addictive as the last two projects. The closing track alone – an alt-rock-influenced Bearface track with a sudden beat change-up and rap verse – makes “Saturation III” a beautiful finale to BROCKHAMPTON’s breakthrough series, a project that will probably go down in rap history.