A gift that gives again 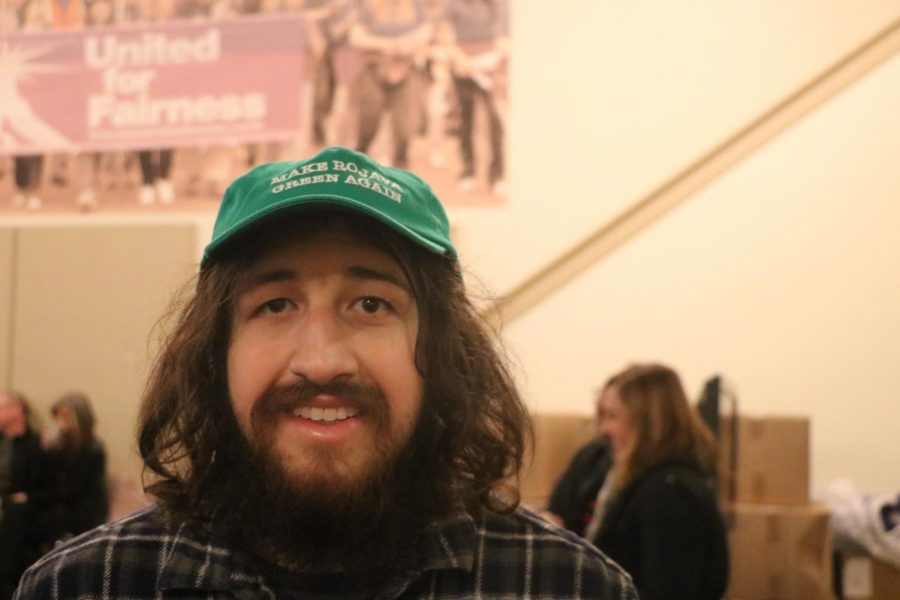 Christopher Luchini wears a hat saying “Make Rojava Green Again”. Referring to a movement that is working towards a healthier climate and also supports the revolution taking place in Rojava (The Autonomous Administration of North and East Syria).

The Civil Liberties Defense Center (CLDC) is an organization founded in 2003 by Lauren Regan. They work with activists, providing free legal counsel and educational resources to put a stop to social injustice and inequality, as well as preventing further destruction to our environment. The CLDC represents activists who have been arrested. Right now the CLDC is defending “The Valve Turners”, a group of five activists who shut the valve of the Keystone Pipeline to stop the flow of oil between the US and Canada. The organization has about 20 active cases across the country.

On Dec. 12, 2019, the CLDC held a benefit concert in order to raise money for the organization and to support their activist defense programs. The CLDC does not receive government endorsements and they take all of their cases pro bono. They receive money from their member groups who pay a membership fee in exchange for trainings (like their Know Your Rights seminars that work to educate people of their rights and how they can defend them), and digital security, among other things. Anyone can support their cause by donating any amount to the organizations. All donations made by the end of December will be matched both by a group of CLDC donors and Patagonia. A link to donate can be found on the CLDC website.

The concert attracted a crowd of 45-50 people and lasted about three hours (6 to 9 p.m.). At the door, they asked for a donation of 10-20 dollars as an entry fee and they provided food and drinks. They sold a number of different printed graphic t-shirts, including one that features a woman in a mask and the title “Stop Snitching.” These shirts were printed on union made shirts and the proceeds of all the shirt sales went to supporting the CLDC’s activist defense programs. The jewelry being sold was made by a woman named Judith Schlacter. Schlacter, Reagan’s pilates teacher, donates handmade jewelry for CLDC events. The earings being sold were a collection of different styles and colors that all featured a pendant of lady justice holding her scale.

In addition to food, drinks, clothing, and jewelry the CLDC also provided entertainment. David Rovics, singer-songwriter and podcaster living in Portland, performed around nine of his songs for the crowd that had gathered in the local Service Employees International Union office building on Foster in southeast Portland. His music comments on politics, social issues and many historical events like the 2003 Iraq war. Rovics’ unique voice and captivating commentary on the world made for a perfect backdrop to the sporadic conversation that rose and fell throughout the large room. In between songs Rovics told sarcastic jokes that prompted occasional laughter. After Rovics performed and Regan spoke for about 45 minutes, a folk band called  Alder Street played to finish out the night.

In 2019 the CLDC added a new lawyer to their team and hired Kathrine Gorell as the grants and communication director. Gorell was the organizer of Saturday’s event. Moving forward into 2020 they are hoping to hire two new lawyers, one to be stationed near the Rocky’s to work on rural climate activist cases, and the other would work from their office in Eugene. They are also thinking of opening up a small office in southern Ore. to focus on immigration law.

As her closing address to the attendees of the event, Regan gave a hopeful message: “To do something every day, to work toward the better world we all wish to see, releases some of my anxiety.”