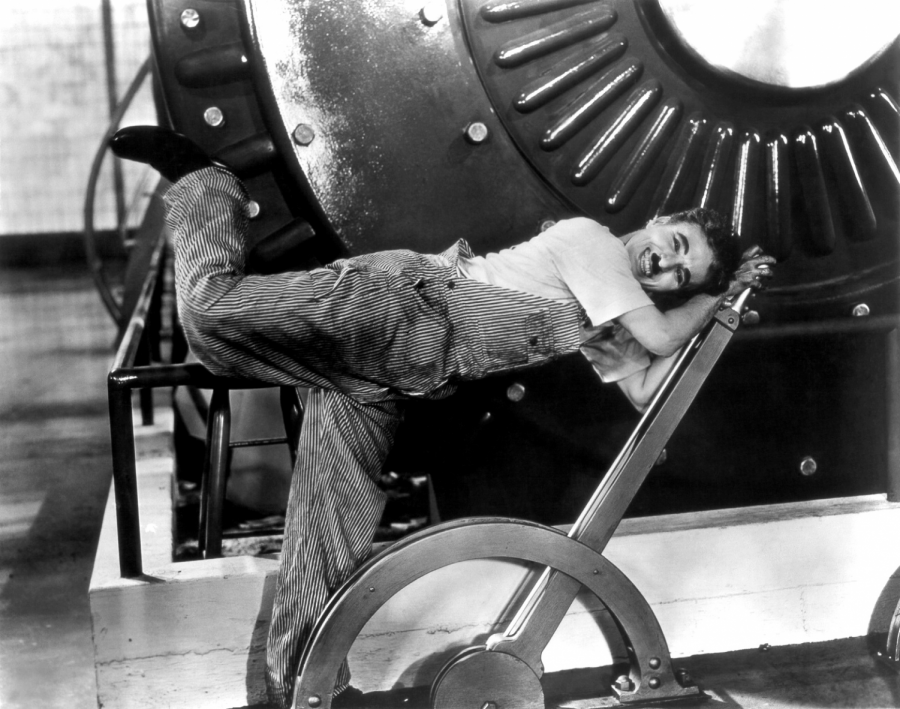 Posing for a photoshoot to advertise his film, Charlie Caplin leans over a lever.

At the junction of two film eras, the legendary Charlie Chaplin and his Little Tramp character take to the screen in the film “Modern Times.” By 1936, the era of silent film that Chaplin dominated had already been over for five years and in its place was the era of Talkies. This era abandoned silent film in order to embrace the modern advent of sound technologies that made dialogue possible. This shift in the industry left Chaplin at a career impasse— he could either hold onto silent film and lose relevance, or embrace sound and leave silent film behind.

“Modern Times” became the stage for this internal debate by featuring both styles of film tangled together in an artful yet almost gladiatorial fashion that makes the film a gem of history and an insightful commentary that still holds relevance today.

The film opens unapologetically as we see a herd of sheep stampeding across the screen, which then fades to a mirrored image of people coming out of a subway. This clear reference to the concept of sheeple sets the tone for how the audience will interpret the rest of the story as it moves on to focus on its main character, The Tramp, one of many workers in the “pursuit of happyness” as the film refers to it.

Tramp is first seen working at a factory under a seemingly omnipresent and oppressing boss. Cameras observe every part of the building and large screens depict the figurehead as he commands the fleet of workers. When the use of spoken dialogue is first introduced within the film, the only person that speaks is this boss, showing a disconnect between those that have power and those who do not.

This theme of who speaks serves to comment on the problems of modernization for those who are poor, as well as serve as a primary communicator of Chaplin’s own internal dialogue, as seen through how those who speak demand those who are not modernized to become so. This demand is what leaves Tramp confused and lost as the world around him tries to morph him into their own agendas. However, Tramp learns to overcome this by finding his own voice through singing— reflective of how Chaplin himself would go on to continue making films incorporating sound while still holding on to his own values.

The most fascinating part about this film however, is that despite these challenging topics, the film as a whole is not depressing. At heart, it is still very much a comedy. The bubbly personality of the film characteristic of Chaplin’s style, keeps the experience light and engaging. No tear is shed over the course of the films depressing topics, yet the audience is still left with an understanding of its core messages.

This is likely due to Chaplins understanding that most of his audience already feels the struggles he is depicting. He understood that his job wasn’t to remind people how sad things were, but to take those hard situations and make fun out of them so that life may be more enjoyable. So that those who struggle may fight on, as the screen turns dark and that audience is left with the films final words: “We’ll get along!”

Overall, the intentional use of Silent Film and Talkie Era styles in conjunction produce a film that is relevant not only as the display of an important turning point for film, but also as an essential commentary on the social-cultural issues of what modernization looks like to society, an issue that is still dealt with today. These elements come together harmoniously, making the film a relevant, artful and pivotal piece of work that is worth watching.