‘Rise of Skywalker’: Not with a bang but with a whimper 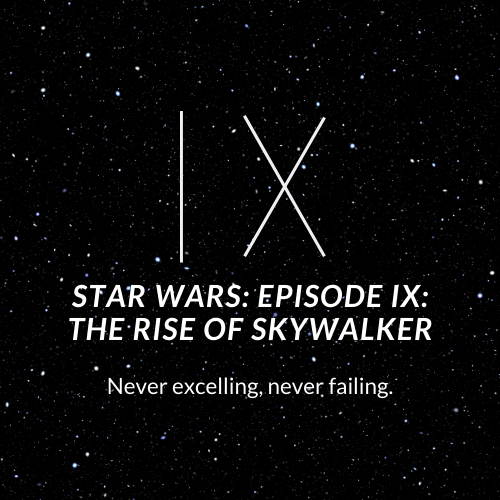 A minimalistic poster for the final installment of the Skywalker saga.

It’s never easy being the third film in a Star Wars trilogy. “Return of the Jedi” was forced to follow up the landmark piece of genre fiction that was “Empire Strikes Back,” and “Revenge of the Sith” was stuck following up two disappointing blockbusters that had little love from critics and audiences.

“The Rise of Skywalker,” however, was not just tasked with the job of wrapping up the most oddly constructed blockbuster trilogy in recent memory, but also with finishing the story spanning the eight films before it. It’s incredibly hard to finish the franchise that is responsible for the redefining of the word blockbuster, billions and billions in revenue, and for many directors and actors the mere notion of it would be a nightmare.

Yet JJ Abrams stepped up to the plate, returning as director following “The Force Awakens” in 2015 and succeeding Rian Johnson’s work on “The Last Jedi,” bringing with him every cast member he could possibly squeeze in alongside Daisy Ridley’s Rey and Adam Drivers’ Kylo Ren.

Unfortunately, it is unable to pull the insurmountable task off with even passable results, faltering under the monolithic weight the “Star Wars” name brings with it.

While not as bad as “Attack of the Clones,” which is still the only “Star Wars” film that I would call bad, I’d definitely hesitate to call “Rise of Skywalker” good either. It rests in the ever uncomfortable and disappointing zone of pure mediocrity.

The story centers around a mysterious transmission from Emperor Palpatine, the main antagonist of the original and the prequel trilogies, sending a mysterious transmission from an unknown location. Only two wayfinders exist to help locate the planet, and one of them is already in use of the supreme leader of the First Order Kylo Ren, who has now met with Emperor Palpatine and has learned of his plan which has been in motion since the downfall of the Empire.

Meanwhile the Resistance forces hide out on a forest planet, biding their time until they can deliver an effective blow to the First Order. When Rey discovers the key to locating Palpatine, she must embark on a cross galaxy quest to beat the First Order to the second wayfinder, with the help of her friends Finn, Poe, C-3PO, BB-8 and Chewbacca.

While on paper the plot of the film isn’t bad, in action it fails to engage in any meaningful way. For the first hour and a half the film doesn’t give the audience a chance to breathe, which may be good given the story we see in that time is honestly quite underwhelming.

Then, once that slog of film is over and the third act begins, it feels like an hour and a half is missing from the film, leaving some Frankenstein’s monster of editing to connect the halves together -not to mention the repetition that each location oozes. Not one location, despite the fact that only three planets return from previous films feels like a new place. Pasana feels like Tatooine, Exegol feels like the second Death Star, which is especially disappointing given that we have an extended layover at the wreckage of the second death star. Each location feels like a trip to a poorly done reconstruction of better locales from other films.

The third act however, is fine.