The queen of ‘anti-pop’ accepts her crown 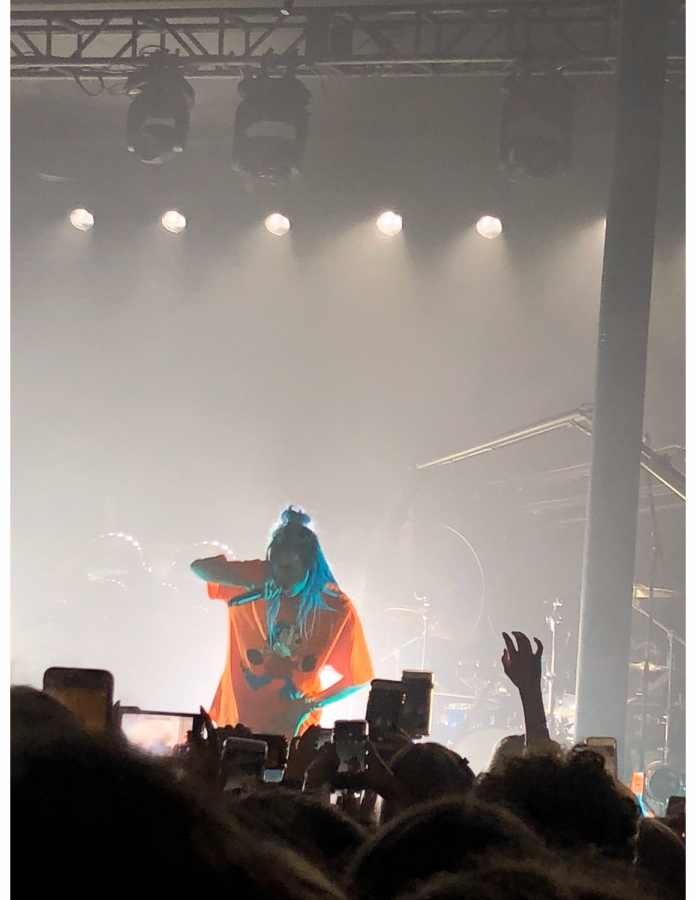 At 19 years old, Billie Eilish has won six Grammys, performed three tours, directed three music videos, released an EP and an album along with multiple hit singles. Eilish has done more than the average teenager, and continues to raise the bar for all artists in the music industry. Known for her boldly dyed hair and oversized streetwear, Eilish pushes the envelope of the definition that is held to a 21st century singer-songwriter.

As Eilish has risen to stardom, she has continued to stay authentic and true to her values. This theme of being down to earth in spite of fame and success is demonstrated in her documentary, “Billie Eilish: The World’s a Little Blurry,” available to stream on Apple TV+. The documentary follows her life as Eilish writes and produces her Grammy-award winning album, goes on an international tour, and faces multiple physical and mental challenges due to previous injuries and relationship issues. As Eilish struggles with the busy schedule of a teenage musician, she is supported by her family constantly.

Eilish’s early life was surrounded by creativity and music. Her parents, Maggie Baird and Patrick O’Connell, were both artistic people who wanted to inspire their kids to go after their dreams, and that started with the atmosphere of music they fostered at home. Eilish was homeschooled, and was a passionate contemporary dancer until an injury damaged her growth plate and left her unable to further pursue her love of dance. This brought her to music, and after “Ocean Eyes”, the first song she ever recorded went viral, she began her path into the music industry, with the help of her brother and now co-producer, Finneas O’Connell.

O’Connell, known independently for his music as FINNEAS, is a major player in Eilish’s career as a musician. The documentary chronicles the duo writing and composing the 14 tracks of her first full-length album, “When We All Fall Asleep, Where Do We Go?” O’Connell supports Eilish’s creative decisions, but also acts as an adviser for her music career overall.

As O’Connell and Eilish continued to work on the album, the brother-sister team came across multiple creative obstacles that specifically pertained to Eilish’s image. “[Eilish] is so woke about her own persona on the internet that I think she’s terrified of anything that she makes being hated,” O’Connell said. At this time, O’Connell and Eilish were having a discussion with their parents about producing a song that’s meant to be popular, but Eilish didn’t feel like it was resonating with her. It was even mentioned that their record label had told O’Connell they “have to write a hit,” which was putting an enormous amount of pressure on Eilish and O’Connell.

Eilish’s involvement in the creative process for her music videos, performances, and songs starts with Eilish and O’Connell in their home studio, and ends on the internet and on the stage. The sibling pair continues to create a unique sound that leaves fans wanting more. For her first preliminary music videos, Eilish and her record label brought in directors, but after a moment of frustration with the director of the “When the Party’s Over” music video, Eilish decided that she would direct her next music video— and she committed to her word.

The first music video she directed was for her song “Xanny,” and it has 90 million views on YouTube. It is groundbreaking to see a young woman have such a strong voice in her creative process, as often in the music industry that can be hard to come by, due to controlling record labels and the need for a perfectly crafted public image.

Much of the film has the feel of a home video, giving the viewer a sense of being a part of Eilish’s family, and not just watching from a distance. It feels like Eilish and her family are letting the viewer into a private moment, especially at times when emotions are running high. Seeing Eilish talk to her mother like a director and less like a teenager is one example of how Eilish is taking control of her own career.

Eilish isn’t always a professional, and still is shown being a sulky teenager, feeling upset after being thrown into a meet and greet with little warning or preparation. The day after, on the tour bus, Eilish brings up the incident and also begins to feel upset about a negative comment on her Instagram post.

“I don’t want anyone who knows who I am, and is any sort of fan or knows a fan, to see me in any sort of awkward situation,” Eilish said. “It’s embarrassing, and I have to keep smiling. And, if I don’t, they hate me, and they think I’m horrible.”

Though most teenagers can’t relate to the struggles of being a pop star, they can relate to wanting to be liked by others. Eilish’s music speaks to her generation, and it will continue to as she progresses through her career. She holds a unique perspective as a member of Generation Z, an age group that has made a statement by speaking out and advocating for mental health, as well as other social issues that often are stigmatized.

Eilish herself struggles with mental illness, and is open about her diagnosed depression and Tourette’s syndrome, a condition that causes tics that leave her unable to control her movements and focus. “Billie Eilish: The World’s A Little Blurry” takes a real look at the challenges Eilish faces with Tourette’s, and it demonstrates Eilish’s maturity, and her ability to comfortably discuss her battle with mental health. Eilish establishing herself to the world as someone who wants to remove the stigma around mental illness is a bold move, but one that adds to the authenticity of her persona.

“Billie Eilish: The World’s a Little Blurry” is a transparent depiction of Eilish’s life in the spotlight as she overcomes obstacles, breaks away from negative experiences, and expresses herself genuinely through music and performance. Eilish is equal parts relatable and enviable, as she performs her heart out on stages around the world, not letting physical or mental issues get in the way. Though Eilish’s world may be blurry, her path to stardom is clear.