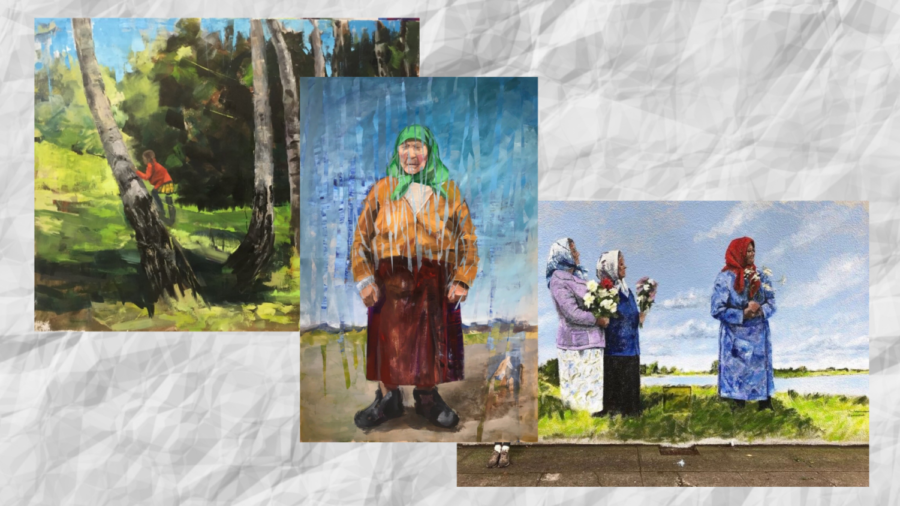 Three of Tatyana Ostanpenko's paintings, including a mural that she was commissioned for (bottom right)

Tatyana Ostapenko is an independent artist based in Portland, Ore. She was born and raised in Soviet Ukraine, later moving to the United States and earning a BFA in Studio Practice from Portland State University.

Ostapenko began her career doing street photography. Now, she works in contemporary painting and often uses pictures she took in her travels to post-soviet Ukraine to inspire her artwork.

Throughout the majority of her career, her artwork has revolved around women’s rights in both Ukraine and the U.S. as well as trans-generational trauma.

Her exhibit “Larger Than Me” was displayed in the Kathrin Cawein Gallery in Forest Grove, Ore. from Feb. 9 to Mar. 4. More information can be found here. If you travel to S.E. Alder St. between 14th and 15th Ave. in Portland, you can find Ostapenko’s original, hand painted mural.

After the Russian invasion of Ukraine on Feb. 24, Ostapenko has organized for 100% of the funds earned from her artwork to go to the Ukraine Crisis Relief Fund.  This is a non-profit that supports other non-profit organizations by connecting them with donors. For two decades, they’ve helped locally led organizations in Afghanistan, Zimbabwe, and many other countries in need.

Since Mar. 1, she has raised over $63,000 for the organization. In the past, her artwork has been bought by corporate and private collections, including the City of Seattle and Stumptown Coffee HQ. In the past week, she’s sold hundreds of paintings ranging in price from $450 to over $2,000.

“It’s insane,” Ostapenko told Oregon Live on the day of the invasion. “To see it unfold on my soil … stupefying is a better word. There’s nobody that I’ve heard from in the city has come into direct harm yet,” she said, “but they all woke up at 5 a.m. to the sound of shelling.” Ostapenko also added that she still has family in Ukraine.

To keep up to date with Ostapenko’s career in both artwork and activism, you can visit her website and follow her Instagram for any new updates.