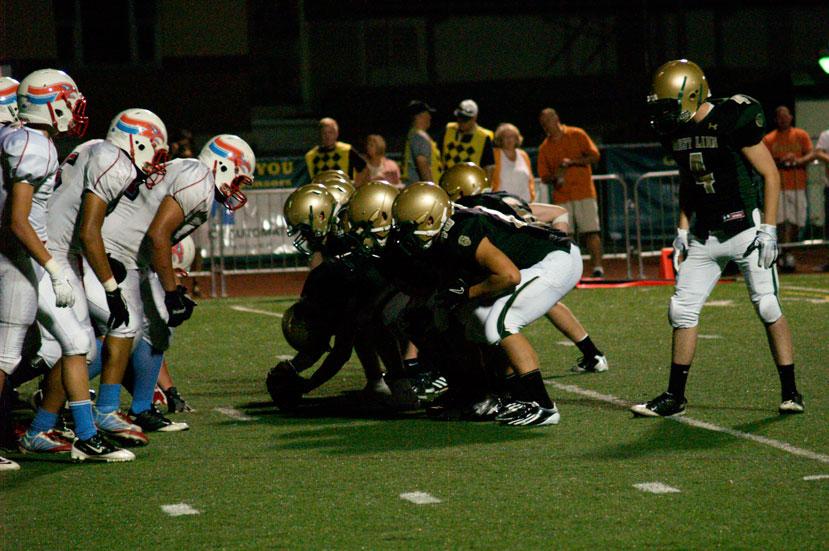 When the West Linn football team faces off against West Salem, it will be a battle of two teams ranked in the top 25 of State. However, when the Lions’ offense looks across the line of scrimmage they will see more than an opponent. Lochlin Deeks is a senior defensive end for the Titans of West Salem, but he spent many of his earlier years in West Linn.

“My time at West Linn was very good” Deeks said. “I had a lot of friends.”

After playing his youth football in the Lions program, and spending his freshman year at West Linn High School, Deeks opted for a change. He went to live with his father and became a Titan.

Vogt had a stellar touchdown catch in the Lions’ second win, a 55-14 beat down of  Centennial. That win, along with a 31-14 season opening victory over Barlow, places the 15th ranked Lions at 2-0 going into their game with the Titans, who are 1-1 and ranked 21st in the State.

“A lot of our success is because of our hard work in practice and great execution during games. These are both attributed to our excellent coaching staff,” Vogt said.

It seems certain that Deeks, a prospect who says he plans to play football in college, will be a big part of the Lions’ game plan. The Lions hope to continue their undefeated streak against the Titans, who undoubtedly want another win after they opened their season with a dismantling courtesy of perennial power Sheldon, falling 51-0. Fans will be in for a treat as excitement is flowing from both sides.

“I’m feeling great about the game and can’t wait to play all my old friends and former teammates,” Deeks said.

“West Salem is a very good football team, the best we have played so far,” Vogt said.”With that being said, we have had a good focused week of practice and have a good game plan going into Friday night. Hopefully we can pull out a win.”