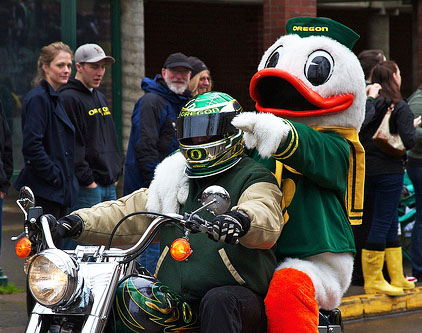 However tough it may be for northwest football fans to hear, the Pacific 12 Conference has performed average at best this season. Despite all of the hype that the conference experienced after absorbing two new teams (Colorado and Utah), the first month of play has not treated the Pac-12 well.

Currently, the Pac-12 features four teams in the AP Top 25 poll, with the Stanford Cardinal ranking the highest at fourth in the nation.

Sitting atop the Pac-12 North are recent powerhouses Oregon and Stanford. These two teams finished first and second, respectively, in the Pacific 10 Conference last season.

Stanford (7-0, 5-0 Pac-12) is undefeated thus far after an impressive road win against a previously ranked Washington opponent.  The Cardinal is led by Heisman Trophy front-runner Andrew Luck, who has surmounted 1,888 yards and 20 touchdowns so far this season. The team’s capability had been questioned early on in the season, but has been solidified after a 65-21 beat-down of Washington. If the team can win out and gain some help by other top Southeastern Conference (SEC) teams losing, they could find themselves in the National Championship hunt.

Oregon (6-1, 4-0 Pac-12) is coming off six straight wins after a deflating opening-season loss to number one ranked LSU. Despite losing starting running back LaMichael James and quarterback Darron Thomas during portions of this season, the Ducks have still been able to place third in scoring. After falling to the Auburn Tigers in the BCS National Championship last season, Oregon has aspirations for a Rose Bowl or even BCS bowl bid.

USC and Arizona State are ranked as the top two teams in the Pac-12 South. Arizona State controls its own destiny to reach the Pac-12 Championship, though, as they have already conquered USC, 43-22.

USC (6-1, 3-1 Pac-12) is still a worthy opponent despite receiving a bowl ban this season due to recruiting violations. The Trojans have been able to compete with high-caliber teams because of their passing attack controlled by quarterback Matt Barkley. What many don’t know is that Barkley has compiled numbers almost identical to Luck this season (2,006 yards, 19 touchdowns) despite being all but left out of the Heisman conversation. The nation will see two of college football’s best quarterbacks collide Oct. 29 when the Trojans take on Stanford.

Arizona State (5-2, 3-1 Pac-12) is sitting second in the Pac-12 South and is ranked 23rd in the nation. The team has proven that they can compete with ranked teams, defeating both Missouri and USC early in the season. However, after a devastating loss to Oregon on Oct. 15, the Sun Devils must bounce back if they have any hopes of reaching the Pac-12 Championship.

With many of these teams having a progressively challenging schedule ahead, the Pac-12 cream of the crop will make its presence known in the coming weeks.