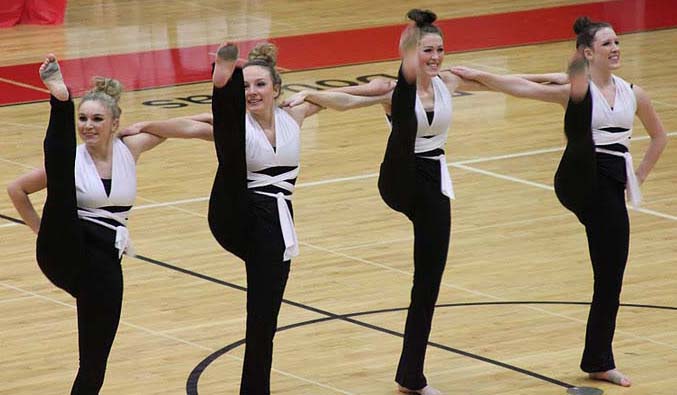 Many students at West Linn High School only know the Debutantes from their halftime dances at home football games. Some don’t know that they compete most weekends at tournaments around the state. Even more are unaware of the countless hours devoted each day after school to perfecting the moves that go into these routines.

“Everyone is really supportive of each other here, but it would be nice to gain some support and credibility within the school as well,” Rachel Sliger, senior Debutante, said. “A lot of people feel as if dancing doesn’t constitute a real sport, but the reality of it is we deserve to be taken seriously. So hopefully we can continue doing well, and may in time earn a little more respect amongst our peers.”

On Nov. 5, the Debs swept all competitions in which they competed, earning first place in Modern, Kick and Pom. The team earned serious hardware in its first three competitions thus far.

“The highlight of this season has probably been our consecutive wins,” Sliger said. “These competitions have been a great opportunity to bond, and to solidify the common goal we’re all working towards for state.”

In its most recent tournament on Nov. 19, the team bested 12 other schools in the Modern category with a score of 80.22. The girls placed second in Kick and Pom, losing by less than a half point in each category.

“Our success has felt very rewarding. And everyone has a lot of hope for state,” Sliger said. “Fall season has proved really beneficial in both improving our skills, and giving us a taste of what winning feels like so that we can pursue it for state.”

Last season, the Debutantes placed fourth in the State behind first place Parkrose and league rivals Canby and Clackamas. With less than a point separating West Linn from second place, the team was once again among the elite programs in the state.

The Debs’ next competition will take place on Dec. 10 at Reynolds High School.