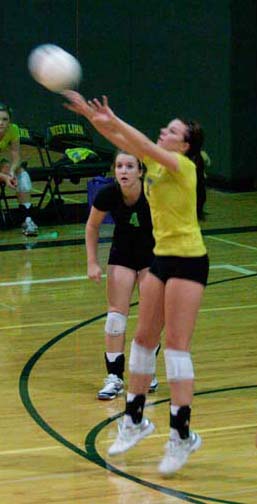 Caitlin O’Neil, junior, was named to the 6A Volleyball All-State 1st Team on Dec. 14. The award caps of a junior season for O’Neil that was highlighted by a seventh place finish in the State playoffs.

“This year was so much fun. I had a great team and made a lot of memories that I will never forget,” O’Neil said.

Although there were many highlights throughout the season, O’Neil also faced adversity for a large part of the schedule. She missed more than two weeks due to a swollen rotator cuff, returning just in time to see the end of the season.

Despite the injury, O’Neil was still present at every game the team played, cheering on her teammates from the bench. She feels that this team was special because of the inclusiveness that each member felt.

“This team is the only team that never had drama,” O’Neil said. “Normally there is one person that just doesn’t fin in but on this team everyone got along amazing.”

As a junior on the Varsity squad, O’Neil was able to witness the experiences of her senior teammates. Now, as she prepares for her senior season, she has an idea of all that she has to look forward to being a leader on the team.

“I’m really excited for senior night! I have been watching people do it for three years, and now it’s my turn,” O’Neil said.