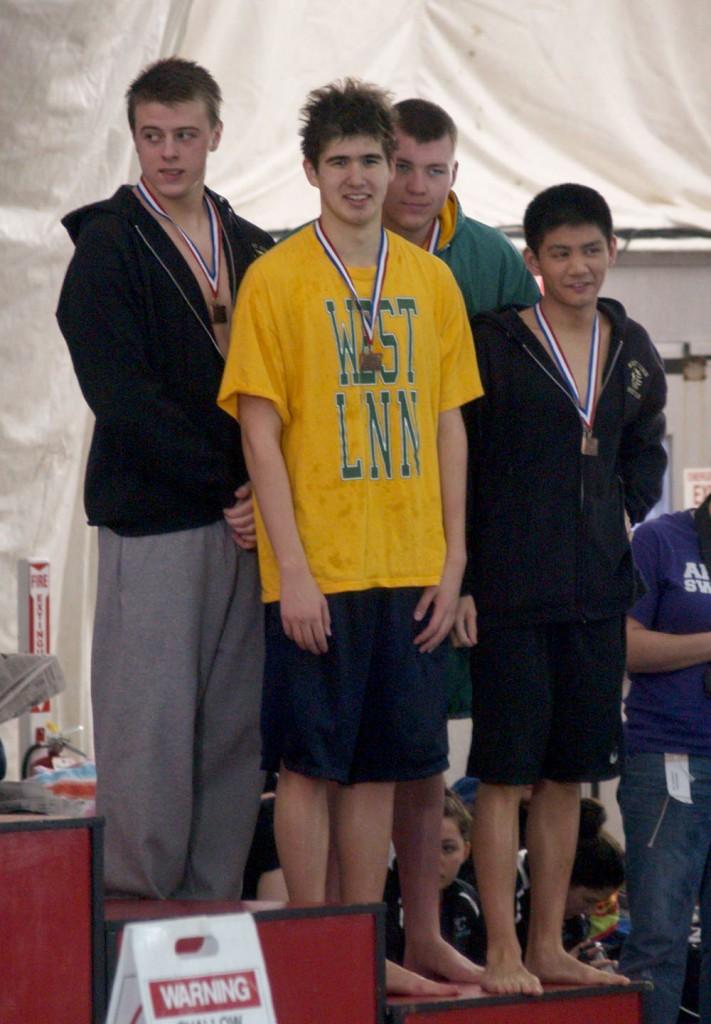 On the night of Jan. 19 two West Linn swimmers stood higher than anyone in their event Brie Balsbough, sophomore, and Curtis Klein, junior, brought home state titles in- the state meet at Mt. Hood Community College.

Balsbough, who placed fourth in last season’s 50-yard freestyle, stepped up her game this year and took home the coveted first place medal in the same event. With a final time of 23.66, Balsbough narrowly beat her close friend  Brenda Cha, sophomore, of Lakeridge High School by a margin of only .01 seconds.

“I was surprised to beat her. She (Cha) is really fast and beat me at Districts,” Balsbough said. “It really came down to who felt the best that day.”

With two years left in her high school swimming career, Balsbough thinks it’s “really cool” to be such a young state champion and believes she can only improve.

The next big race for Balsbough will be the Olympic Trials on June 25- July 2 in Omaha, NE.

“I believe I can qualify,” Balsbough said.

In the mens championship, Klien brought home the gold in the 100-yard backstroke with a time of 51.03, beating Will Tyyrell of Grant High School by .87 seconds. Klien also finished second in the 200-yard freestyle with in 1.40.98.

“Going into the meet I was just hoping for the best time,” Klien said. “I didn’t think I’d do as well as I did, I was shooting for second place.”

With Klien also returning next season, and with most of the field he defeated in the state meet being seniors, he expects there to be less competition next year.
“I expect to do very well next year,” Klien said.

Klien plans to swim in college and possibly, like Balsbough, swim in the Olympic trials in backstroke.

“At the moment I’m swimming 20.609 and the cutoff time is 20.499,” Klien said. The next and final chance for Klien to qualify for the trials is at the Senior Sectionals in April, which is the equivalent of a regional championship