Ducks and Beavers start off football season with success 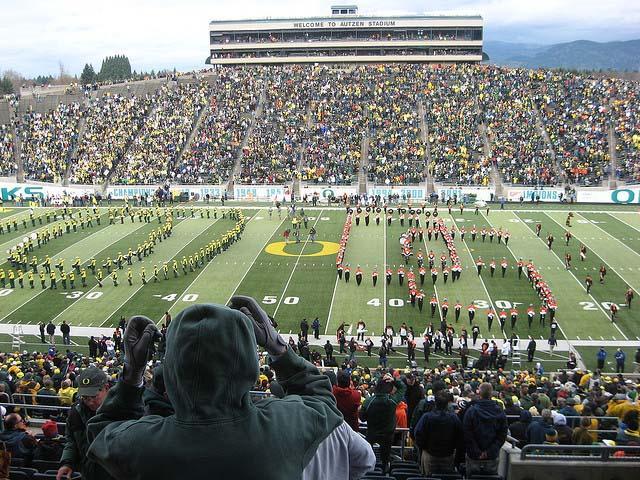 The Oregon Ducks and Oregon State Beavers put Oregon on the map for major college football contenders. The ninth ranked Beavers start strong with five wins edging out number 13 Wisconsin, number 19 UCLA and Arizona by just three points each. In their most recent game they won by their biggest margin yet against Brigham Young University, 42-24. The Ducks jumped from number five to the number two ranking with a 6-0 winning streak in the regular season. In their most recent game the Ducks came out victorious with a 52-21 victory against Washington.

Some key players on both teams are De’Anthony Thomas, Ducks running back, Marcus Mariota, Duck’s quarterback, and Mike Riley, Beaver’s head coach. De’Anthony Thomas has points this season and expected for many more this season. He rushes for an average of 9.2 yards per carry.

“I think De’Anthony is the fastest man in college football. He doesn’t have heisman hopes for two reasons. One, he is not a quarterback, and two, he does not receive that many touches during that game. He also does not get enough notice,” Ryan Squires, OSU senior, said. The sophomore is expected to be a major contender for the heisman trophy.

Both Duck and Beaver fans agree that Mike Riley plays a key role in the Beaver’s success this season.

“Mike Riley won more games here than any other coach before him. I believe he is one of the best coaches in college football because he was able to turn around a less talented team and make it into a big contender in college football,” Squires said.

“Mike Riley has really turned around the Beaver’s program, however I still believe that Chip Kelly is the better of the two coaches.” Kim Bean, U of O Alumni, said.

Marcus Mariota is also a force to be reckoned with. The 6-4, 196 pound freshman from Honolulu, Hawaii has thrown for over 1300 yards this season and has a total of 15 touchdowns. “Marcus Mariota has helped us [the Ducks] out a lot this year. He is a great player and he is really gonna help the team in the coming years. He may just lead the Ducks to a national championship.” Bean said.

The Civil War this year is expected to be interesting. Squires says, “I feel we [Oregon State] have a chance this year. We will have a difficult time shutting down their explosive offense. Our defense should be our biggest help in the Civil War. I think they will put up a good fight though. The Beavers want redemption from getting beaten so many times in the last years, and I think this time we might be able to come out with the win.”

“The Civil War this year should be interesting, the Beavers will definitely be better than last year. I still think that the Ducks will beat them by at least 21 points because they cannot keep up with the Ducks fast paced offense. It should be fun though, I will be at the game.” Bean said.

It should be interesting to watch if the Ducks and the Beavers continue their success. The big question is who will come out with the win in the Civil War game at Reser Stadium on November 4th.