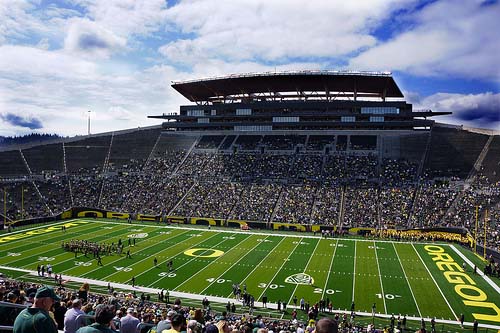 Update: According to National Football League sources University of Oregon’s head coach Chip Kelly has taken the head coaching job for the Philadelphia Eagles. It had been reported that Kelly was going to stay at Oregon.

After meeting with the Cleveland Browns and Philadelphia Eagles for more than seven hours, Chip Kelly, Oregon football coach, surprised many people by staying with the Ducks. After finishing the 2012-2013 season with a 12-1 record and a 35-17 victory over Heisman finalist quarterback Collin Klein and the Kansas State Wildcats in the Fiesta Bowl, Kelly began to focus on his future and possibly coaching in the National Football League.
“I said I’ll always listen [to teams], and that’s what I’ll do,” Kelly said.  Leading up to the Fiesta Bowl, Kelly had dodged all questions about leaving and stated his main focus was on the game.

“I was getting a haircut and saw my name on the bottom of ESPN which I thought was kinda funny because I haven’t talked to anybody,” Kelly said.

Kelly averted taking credit for his recent success, including a 46-7 record over four years by saying “I know that people want to talk to me because of our players. The success of our football program has always been about our guys.”

Oregon fans were chanting “four more years” towards the end of the Fiesta Bowl, relating to Kelly’s four straight Bowl Championship Series appearances, and were worried about how the program would do without him. In fact ,superstar singer Mat Kearney, who was born in Eugene, published a song titled “Chip Don’t Go” and it seems to be working for now.