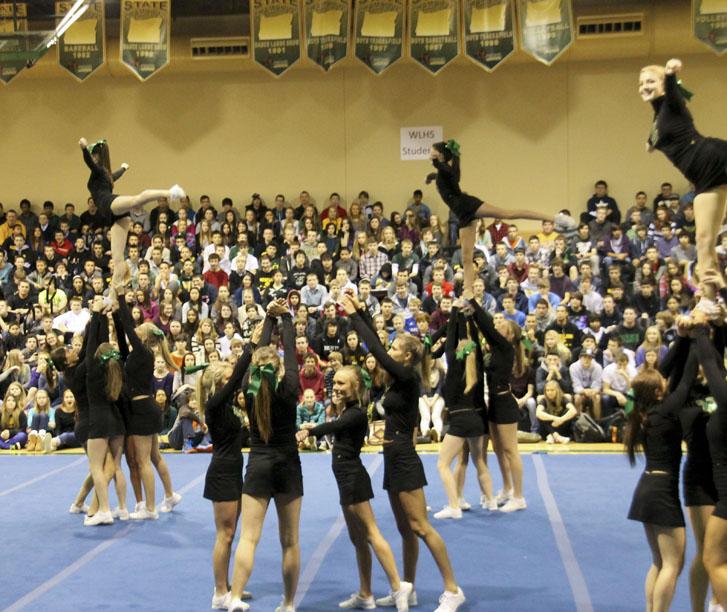 “Initially [our goal] was to trophy,” Nikki Stroup, Cheer coach, said. West Linn placed sixth, one spot short of a trophy, in its division at the state cheer Championship Saturday, Feb. 9. The Cheer team finished with a total score of 61.13. West Linn was only .72 points behind David Douglas and a fifth place trophy.

Stroup was impressed with the way the team adjusted very quick before state due to an injury that left the team short one member.

“Courteney Fisher got a concussion the last ten minutes of the last practice before state, and nobody ever performs at State without someone, and we still finished sixth,” Stroup said.

Fisher, senior, along with Madison Baldwin and Megan McMurtrie, seniors, is a captain on the team. The team is not too upset about leaving without a trophy knowing that they did so well without a key member of their team.

The team has been working on its routine since September of 2012. Their routine was choreographed by Brian Cao, Director of Cheer Programs. Cao is one of the three main choreographers for all high school cheer in Oregon.

The Cheer team also performed the State routine at the Survivor assembly on Friday, Feb. 8 for the school.

Stroup also foresees possible advancements to the cheer program at West Linn. “There are two freshmen on the team, but next year we are trying to have a [Junior Varsity] team, so the younger girls that try out that don’t make it would have a way to get better and set up the team for the next year,” Stroup said.