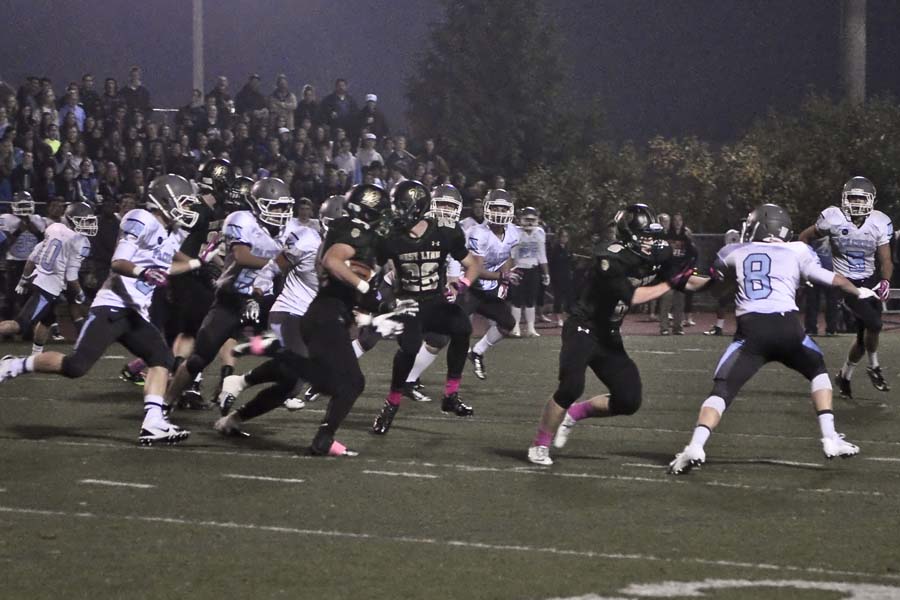 West Linn fell to Lakeridge 28-20 and continued to slide, losing their fourth in a row and fourth in league play.

“The most frustrating part has been that we have so much talent and potential on this team and thing just haven’t gone our way,” Braden Vogt, senior, said. “We’ve been playing really hard, especially last week against Lakeridge, but our effort hasn’t turned into a win.”

The only score came in the first quarter when Lakeridge running back Lopeti Aisea, junior, who ran in from 36 yards out to put Lakeridge up 7-0.

The Lions finally scored in the second quarter on a one yard touchdown run from Nicholas Yokubaitis, junior, and tied the score at 7-7. West Linn put up an early 14-7 lead when quarterback Hayden Coppedge, senior, threw a 77 yard touchdown pass to tight end Kurt Monn, junior. The Pacers responded with a 100 yard kickoff return from Vontrel Mills, senior, and tied the score at 14-all. The Lions punched back when Cameron Schmitz, senior, caught a seven yard touchdown pass from Coppedge but West Linn missed the extra point and were up six, 20-14.

Aisea added another touchdown for Lakeridge when he dashed in from 21 yards away and the Pacers were up 21-20.

Late in the fourth quarter, Lakeridge went up 28-20 when quarterback Eric Dungey, junior, threw a 13 yard touchdown pass to Aisea.

Late turnovers hurt the Lions as Coppedge threw an interception late in the game and West Linn turned it over on downs on a comeback drive attempt.

“As a team all we can do is take our coaching points. Work hard in practice, and keep playing hard in the games,” Vogt said. “We know we have the talent so we are confident we can make a run in the playoffs.”