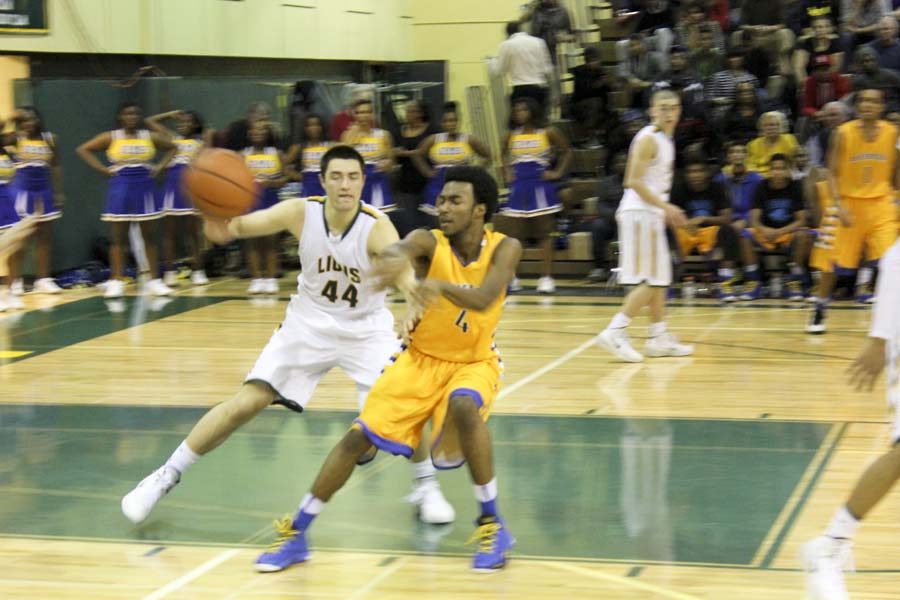 The West Linn Varsity Boys Basketball Team (1-1) took on the Jefferson Democrats (2-0) in one of the most anticipated matchups in West Linn basketball history. Both teams had won a state championship in their respective 6A (West Linn) and 5A (Jefferson) divisions. The Lions fell 75-66 for their first loss of the season.

West Linn started off the game on fire jumping out to an early 13-3 lead. By the end of the first quarter, Jefferson stormed back to tie the game 15-15. The Democrats dominated the game down in the paint with 6’11 center Greyson Smallwood, junior, who had five blocks and forced West Linn to take outside shots, going 5-23 on three pointers.

The Lions could not stop one of the best players in the state in Silas Melson, senior, who has already committed to play basketball at the University of Gonzaga. Melson scored 36 points for the night and 23 in the second half going 10 for 20 along with four three pointers. Melson was also able to shut down guard Payton Pritchard, sophomore, who was held to six points on the night.

The Lions weren’t out though and pulled to within one with around five minutes left in the game, 55-54. West Linn had all the momentum in the world but Melson stole it for Jefferson and went on a 7-0 run to help close out the game. When the final buzzer sounded, the Democrats escaped with a 75-66 win.

Ryan Shearmire, senior, led the Lions scoring with 22 points and Anthony Mathis had 16.

West Linn will fly to Hawaii this week to participate in the Iolani Classic Tournament.