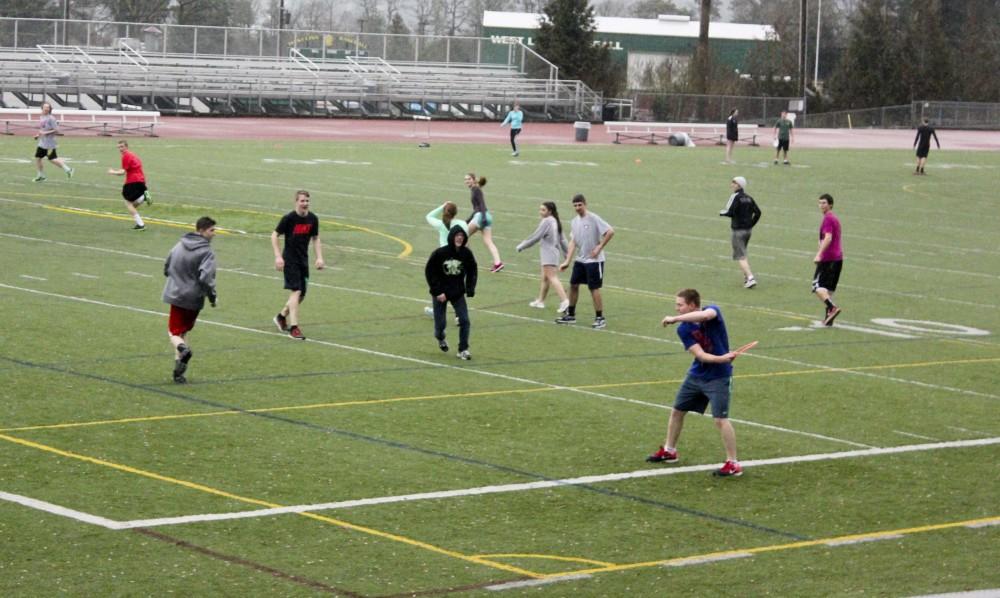 Track, tennis and lacrosse are among the official team sports at West Linn High School.  A small community of students and teachers have established an unofficial Ultimate Frisbee club, the first of its kind at WLHS.  The group has the same “club” status as Math Club or Cheerleading, and it assembles for two-hour practices on the football field on Tuesdays and Thursdays at 3:30 p.m.  Though the members have several objectives, such as eventually obtaining a greater slice of field time for practices, their primary ambitions are to practice Ultimate Frisbee and to inform the WLHS community about the team’s presence.

“By no means is it an incredibly organized event,” Brian Kuzma, Social Studies teacher, said.  Kuzma played Ultimate Frisbee, or simply “Ultimate,” while attending college.  He participates in the WLHS ultimate group by overseeing students and attending most practices.  “Right now, we’re just scrimmaging.  We’re by no means a team.  It depends on what the students would like.”

Ultimate is played in a similar fashion to soccer, with modifications.  Teams score by completing a pass into the opponent’s end zone, and an incomplete pass brings the frisbee within possession of the opponent’s offense.  In America, rules and regulations of Ultimate are issued by USA Ultimate.  Local leagues of Ultimate are offered by this organization.

The group was originally organized when Kaylee Combs, junior, initiated the team by filling out necessary forms and docking field time.  The team is not at the point of ordering uniforms and joining a local league, rather, members focus upon mobilizing and exciting a wider base of students.  The target size of the group is around 30 students.

“Every day, we’ve gotten two to three new people,” Carson Waller, junior and Ultimate participant, said.  “Everyone has been trying to bring someone new every time.  We have about eight core people who are staying here and we’re all willing to commit to this every day.”

The team is currently co educational and is not restricted to a specific grade level.  Practices may concern throwing technique, drills or simply tossing a frisbee back and forth. Practices are not particularly rigid in structure and allow for some flexibility, according to Kuzma.

Practices will remain at their usual time and place until March 1 when the group may have to accommodate for other spring sports by relocating to local fields.