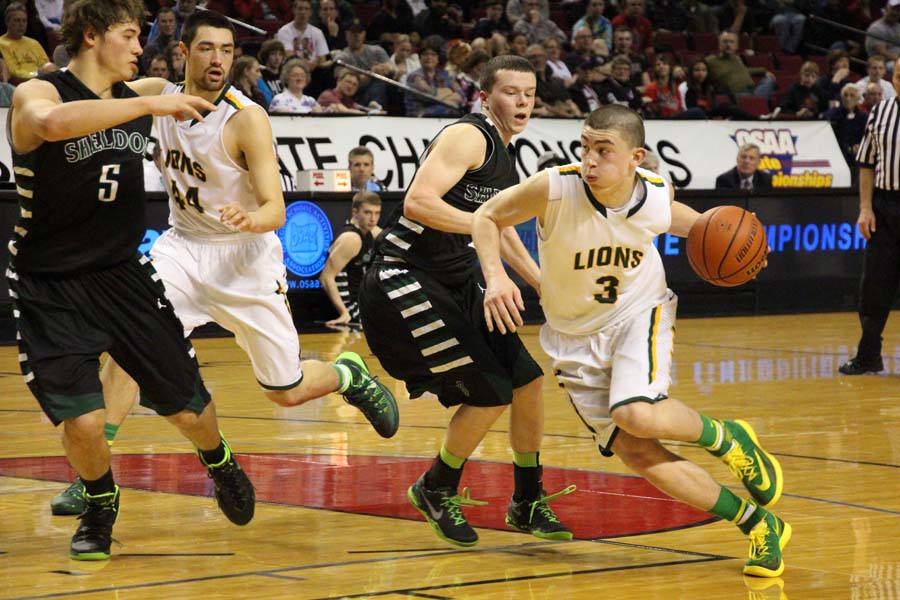 With a 67-56 win over the Sheldon Irish (21-9), the West Linn Boys Varsity Basketball team (27-4) has cemented itself as the number one team in the state of Oregon with its second state title in as many years. The Lions are the first team to win back-to-back state titles since the Jesuit Crusaders won from 2009-2012.

West Linn struggled early in the game trailing the Irish by five at the end of the first quarter, 13-8. The Lions turned it around in the second and were able to put the pedal to the medal.

“We started playing man and shut down any open threes,” Hayden Coppedge, senior, said regarding the comeback. “We rebounded well too and that really helped.” West Linn put up 23 in the second quarter and by halftime, had a 31-24 lead.

While the Lions extended their lead to double digits in the second half, Sheldon was able to trim the lead to single digits, but was never able to completely comeback, and West Linn controlled the second half. Guided by sophomore guard Payton Pritchard’s 21 points, the Lions cruised and when the buzzer sounded, were back-to-back state champions.

“As a senior it’s the best way to go out. It’s an awesome feeling,” Coppedge said. With the win, West Linn is without a doubt the best team in the state of Oregon. Anthony Mathis, junior, and Pritchard, were both unanimously voted First Team All League with Ryan Shearmire, senior, voted to Second Team. Coppedge, Kevin Edwards, senior, and CJ Sitton, senior, were voted Honorable Mention.