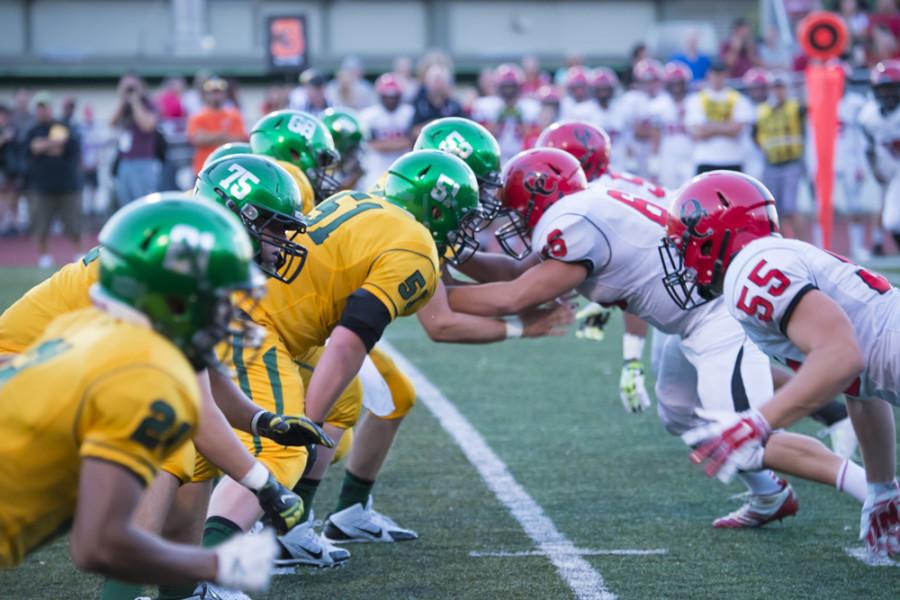 Despite conference realignment, West Linn (1-0) and Oregon City (0-1) continued its annual football rivalry last Friday. The Pioneers were widely regarded as one of the best teams in the state of Oregon. But apparently West Linn didn’t receive the memo, beating Oregon City for the first time since 2011, 28-21.
Throughout the first quarter, neither defense would give an inch and when the second quarter rolled around, there wasn’t a single point on the board.
“We stopped their running game really well,” Ryan Anderson, senior defensive lineman/outside linebacker, said. “We were able to contain their best running back.”
The Lions struck first with a 20-yard pass from quarterback Brooks DeBisschop, junior, to Elijah Molden, sophomore. Molden and DeBisschop scored again, this time from 45 yards out. A fumbled snap caused holder Connor Berggren, junior, to scramble for the end zone, scoring two points for West Linn, putting them up 15-0. The Pioneers finally scored when quarterback Thomas Hamilton, senior, tossed a six-yard touchdown to Sam Maughan, junior. Hamilton added another touchdown pass when he threw 21-yards to Trevon Bradford, freshman, and Oregon City was within one at halftime, 15-14.
The Pioneers took the lead in the third quarter when Hamilton and Bradford connected again, for another 21-yard touchdown pass. The Lions answered when quarterback Tim Tawa, sophomore, threw an 11-yard touchdown to Jake Zeller, senior, and West Linn took back the lead, 22-21.
The only score in the fourth quarter came from the Lions when Tawa and Cody Coppedge, junior, connected on a 47-yard bomb to add West Linn’s lead to seven, 28-21. The Pioneers had a last second Hail Mary opportunity but it fell incomplete, the clock struck triple zeroes, and the Lions emerged victorious.
“The first win of the season is huge. We will look to build on this momentum going into the rest of the season,” Anderson said. “Beating OC sends a message to the other teams that we are ready to go this year.”
This Friday, West Linn will travel to David Douglas (1-0) and take on the Scots at 7 p.m. in a non-league game. The last time the Lions took on David Douglas was in the 2011 playoffs, with the Scots upsetting West Linn, 17-14.