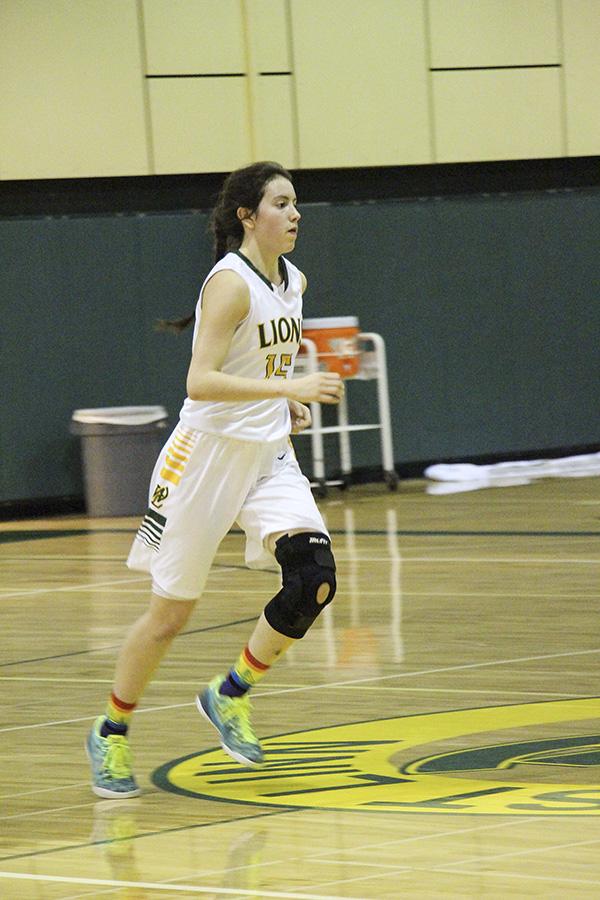 Taylor, senior, plays forward for the West Linn Lions. She scored ten points against Tigard leading the lions to a 45-35 win.

Basketball is her life. Taylor Enders, senior, on the Girls Varsity Basketball Team recently announced her commitment to Utah State University. She hopes that this opportunity leads her to grow in her skills and that it will take her overseas.

Enders started playing basketball in fourth grade when a referee, who happened to be an Amature Atheltic Union, AAU, basketball coach, approached her and said that she should consider playing competitively. Taking his advice, Enders played and fell in love with the game.

“I love accomplishing things I didn’t think I could possibly do and basketball pushes me to be great at different things such as shooting and ball handling,” Enders said.

Hitting the gym every day and by freshman year, Enders was shaping up to be a Division I recruit. She, played JV her freshman year, made varsity her sophomore year, but was injured and out all season with a knee injury. At that time, she was playing for Hermiston High School.

In her junior year, Enders transferred to West Linn for a better academic opportunity. As winter rolled around, she trained and prepared for the upcoming school season. Unfortunately, a week before tryouts, Enders hurt her hip flexor and knee, leaving her on the bench for almost the whole season.  She was finally cleared to play in the last game against Oregon CIty. In that game, Enders led West Linn to a win against the Pioneers for the first time in 35 years during a school season.

Entering her last spring/summer season of AAU, Enders knew that it had to be a big off-season for her. She joined the club FAST Basketball  which had many of her West Linn Teammates on it.

“I liked how they were willing to work with me. They played the kind of style I liked to play– fast,”  FAST had many big college viewing tournaments planned for its teams, offering Enders the chance she was looking for to be seen.

At the 3 Stripes Arizona College Viewing Tournament, Utah State saw Ender,  “We were impressed with her athletic ability and competitive nature,” Jerry Finkbeiner, head coach of Utah State University Womens Basketball said.  They only watched two games, and  then contacted Enders FAST coach, Myke Landis, and told him they wanted her. Utah State flew Enders down last summer and she fell in love with the school.

“When I went to Utah, it immediately felt like home! The people in the community were so kind and welcoming. In Logan, sports are a huge deal, even for women’s sports which is amazing,” she said.

Enders has led her team to winning huge games such as the Canby game when she made the game-winning three with four seconds left on the clock. She believes that her hard work and the support from friends and family has helped her achieve her dream of earning a scholarship.

“Always work hard. When people say you won’t make it big time, don’t listen to them,” Enders said, “Make them motivate you, and always hustle no matter what.”