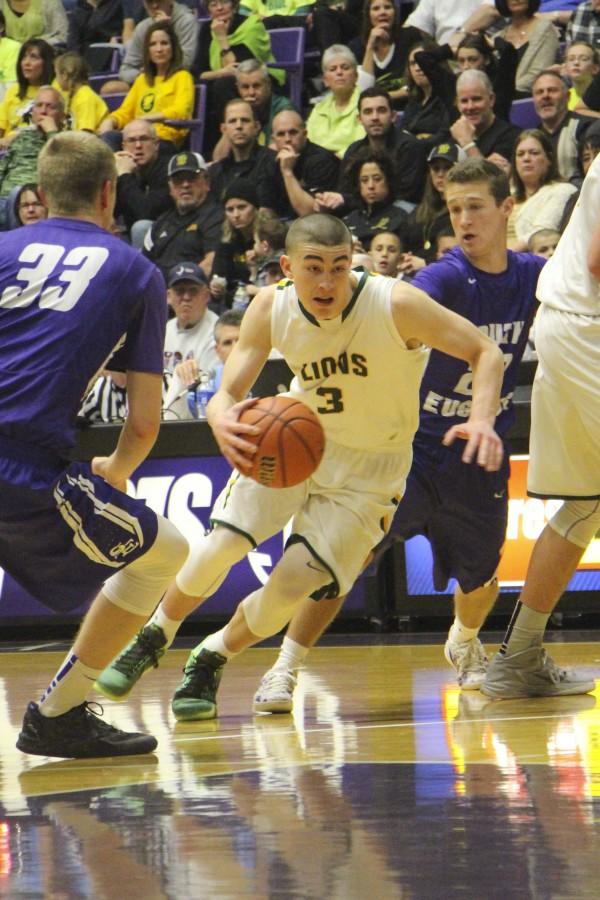 Payton Pritchard, junior, weaves through South Eugene defense during the 2015 play offs. Pritchard was recently named the Oregon Gatorade Player of the Year.

Every day at 7 a.m  when most students at West Linn High School are just getting out of bed, Payton Pritchard, junior, is already up and working on his strength, endurance, ball handling and shooting skills. He does so two to three times a day.

Pritchard was named Oregon Gatorade Player of the Year and the 2014 and 2015 Class 6A Player of the Year. When Pritchard steps onto the court he averages 22.0 points, 5.8 assists, 3.8 rebounds, and 2.4 steals during her high school career. Off the court, he maintains a 3.61 Grade Point Average.

“Earning this award is a great accomplishment for me, and I feel very honored to have been selected,” he said.

The Gatorade State Player of the Year Award was created in 1985 to promote and celebrate the nation’s most outstanding high school talents for their athletic achievement, academic excellence and exemplary character.

“The reason why Payton was chosen for this award is obvious. He was the best player in the state,” Eric Viuhkola, West Linn Varsity Basketball Coach, said.

Pritchard was introduced to basketball by his mother, Melissa, and father, Terry, when he was in kindergarten. He also played baseball and football but quit both. Baseball was “too slow” and he was forced to quit football when he was a freshman because he was being heavily recruited for basketball and the fear of injury was too great.  Pritchard has committed to University of Oklahoma to continue his career.

“I chose Oklahoma because it was a really good fit for me and I have a lot of family in Oklahoma too,” he said.