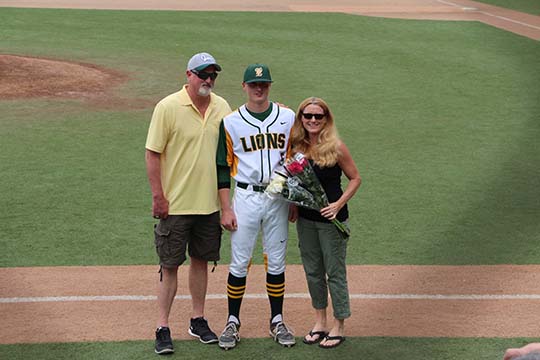 Karsen Lindell, senior, is honored with his parents on senior night held on, May 18. Lindell threw a one hit game for the Lions against Central Catholic in the OSAA State Quarterfinals, helping them to earn a 2-1 win over the Rams. Next up is the semifinals against McMinnville, Tuesday 5 p.m. at WLHS.

Karsen Lindell, senior, pitched a one-hit complete game for the Lions, giving up an inside-the-park home run in the bottom of the fifth inning. Tim Tawa, sophomore, drove in a run at the top of the sixth, tying the game at one.

The Lions needed one extra inning to defeat the Rams as Tate Hoffman, junior, gave the Lions the winning run with his third homer of the year.

This win sends the Lions into the semifinals, where they will play McMinnville (24-5, 14-2 Greater Valley Conference), Tuesday 5 p.m. at WLHS.